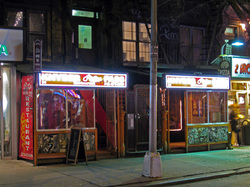 We gave Khyber Pass a try because it was something out of the ordinary. Amidst the endless array of Italian, Indian, and Thai restaurants out there Afghani food seemed exotic, different, and new. Unfortunately, the food here was neither special nor exotic. Flavors did not jump out, nor did they mix well with one another. They simply sat, stagnant on the plate. The surroundings were cozy and dark, but only mediocre in the grand scheme of things. The best thing to do here, it seems, is to sit on the floor at one of the window tables and share a bottle of wine and a hooka pipe. That's what our neighbors were doing, and they seemed to be having a much better time than we were! 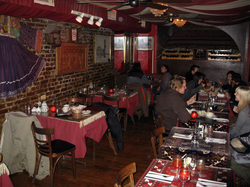 Set down a level from the street, Khyber Pass offers a cozy refuge from busy St. Mark's Place. Dark red walls are dimly-lit by chandelier lighting hanging from fabric-draped ceilings. Candles emit a soft glow. Small tables are covered in woven rugs and topped by glass, or heavy plastic that looks like glass, and authentic Afghani music plays overhead. In the air, the sweet smell of apple tobacco from hookas being smoked at neighborhood tables. On the wall, various knick-knacks such as musical instruments, authentic costumes, and the obligatory picture of that green-eyed girl from National Geographic, you'll know it when you see it.

Service is helpful and attentive, though a little distant. 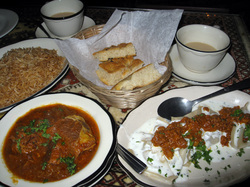 Not familiar with the food, and with many items looking alike, we choose randomly from a list of lamb dishes and dumplings.

First, an order of Mantoo, steamed dumplings with beef, onions, and spices, with a yogurt sauce ($5.50). The dumplings came out, 5 on a plate, with a meat sauce that smelled a lot like Sloppy Joes. The dough was nicely thick and chewy, obviously homemade, though the filling was nothing special. The yogurt sauce gave an interesting tang but we didn't find the flavors of the filling and the sauce to be complimentary.
For an entree, we split the Quorma Badenjan with lamb ($12.95), which was sauteed eggplant, peppers, tomatoes, and lamb. In this case, the eggplant was pureed, which gave it an off-putting flavor and slimy consistency. The meat was tough and dry. With the lamb, a nice brown basmati rice was slightly undercooked but had a light coating of fragrant oil. I enjoyed the rice by itself.

With the meal came a basket of warm bread that reminded me of focaccia. It was good enough, though I only ate one small piece and wanted no more.

With the meal we had a traditional tea, Shir Chay, made with steamed milk, rose, and cardamom ($5.50). The tea was immediately fragrant, as if we had sprayed rose oil into the air though the taste was not sweet. We sweetened it with sugar and the flavor was enjoyable. It was a small pot, but a seemingly endless amount of tea, more than enough for two.

Bathrooms could use a little attention. The rest of the restaurant was too dark to tell.

The food is nothing special