This is a fun place to go once in a while when you want to spend lots of $$$$ and have a few drinks, though I would not make it a regular stop. Yeah, after writing this review I saw that, indeed, Raglan Road indeed has a restaurant in Disney World. Ah, I say, that explains everything!!! 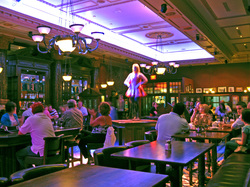 An American attempt at the traditional Irish Pub-like atmosphere with lots of dark wood, Irish bric-a-brac, and high ceilings, though much too new, shiny, and huge too be the real thing. Kind of like if Disney had built an Irish pub- which is fine, if you like that kind of thing. They even sell T-shirts and caps. Still, it's a very pretty space, overall,  and has 2 patios with outdoor seating and a hopping bar. The music was traditional Irish folk and Celtic on CD and then a live Irish duo was playing, which gave the whole place a fun and festive flair. The lighting is very dark so don't go here if you like to see your food. I, luckily, like it that way: There is a large bar with a selection of whiskeys, stouts, and ales, all at premium prices.

Both the hostess and waitress were very friendly, though the waitress seemed a little clueless, we had to ask for silverware. 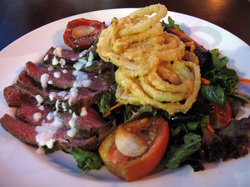 Raglan Road is not cheap, so we didn't order much. The menu looked to be authentically Irish with Shepard's-style pie, fish & chips, bangers & mash, all things you would see on a real Irish menu, though there are some non-Irish dishes as well, such as a salmon salad, scallops, and fried chicken. On this visit, we ordered the seared beef salad and the Shepard's-style pie, and 2 pints of cider which, although cold, was lacking the nice frothy head that makes cider in Ireland so good. Too bad! The food was presented beautifully. The salad, although listed as a 'starter' was definitely entrée size and was delicious, the meat cooked perfectly med-rare and served with a tasty horseradish cream. The 'pie' was creatively served, round, from a mold, with the meat on the bottom and the potatoes on the top, and a sauce (balsamic reduction?) surrounding the bottom. The meat (beef and lamb) might have been a little dry, but the sauce was excellent- there could have been more of it. Unfortunately, the pie wasn't served very hot and got cold quickly as we sat outside. We were not served bread.

I like that this restaurant has a sense of humor, with funny Irish quotes and creative advertisements. Even their website is great. The live music was an added bonus and sounded fantastic and there was also an Irish dancer who got up and did a little jig, which was unexpected and unique. On the night we were there it was not very crowded but I could see it being a very fun bar on crowded nights. The service is friendly, if not great, and the restaurant itself is very pretty, on a grand, Disney-esque scale.

It's not anything like a real Irish pub and the food, although good, was not necessarily worth the price. The drinks, too, are very expensive. No bread with entrees (or was that the server's fault?) Service a little distracted and slow.