Of course, with any Daniel Boulud venue you expect excellence, and excellence is certainly what you get at DB Bistro; the food is wonderful, and the service is seamless but not stuffy. The food did not always hit the mark, like the cold pommes frites and the overly-decadent chocolate tart, but when it did hit, it was a perfect bullseye. But the biggest downside of this restaurant is it's consistent and unrelenting popularity, which make the already small space seem even more crowded, noisy, and  uncomfortable. Still, it is the best place we know of to go pre or post theatre, especially for the great value $45 pre-fix. Also try the pretzel bread, Madeleines, and croissants in the morning. 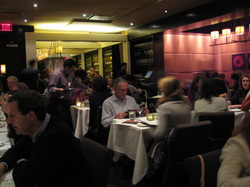 With 2 distinct dining areas, a very casual red and beige room with wood tables and leather chairs in the front, and a more formal traditional room with paneling and carpet in the back, you might think that DB Bistro is two  separate restaurants, though both offer exactly the same menu and service. The host stand lies awkwardly in the middle, choking off guest traffic and making the distinctions between the two rooms even more apparent and perplexing, though on the whole, it all works. In the center, a small bar area with 2 large communal tables is for drinking or for dining, accommodating mostly those without reservations. DB Bistro does not have a visible bar.

In both rooms, front and back, walls are lined with comfortable banquette seating, though tables are placed very close together. The atmosphere is casual and subdued, though it can get noisy when crowded. There is music somewhere in the background, though it is, for the most part, inaudible.

Service here is friendly and attentive, without being stuffy. We had a main server, though many people approached the table, one for bread, one for food, one for coffee, etc. Each was polite, knowledgeable, and professional- perfectly unobtrusive and seamless. Service is reportedly very slow for breakfast. 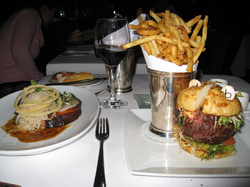 DB Bistro offers a wide variety of French cuisine with a menu that changes often, including a daily theatre pre-fix for $45. To begin, we tried a small traditional Tarte Flambe ($10), which is a wafer thin flatbread with fromage blanc, caramelized onions, and bacon. The richness was nice, though I could never have eaten more than one or two bites. Also brought to the table was a small plate of canapes, nice eggplant and olive tapenades with toast points, and a wonderful array of breads, especially the chewy, salty pretzel bread.

Not expecting to order the pre-fix but having a reservation early enough, we were swayed by the excellent choices offered and, so, succumbed to the allure of the 3-course bargain. One of the nice things about the DB pre-fix is that the portions included are full-sized, and not mini-versions, like some of the competitors, so you are sure to not go hungry.

For a first course, we started light with a refreshing scallop ceviche with citrus and a sharp hit of peppery spice. As an entree, the roast suckling pig had a nice fatty, crispy layer on the outside, a succulent and savory stuffing of pork and potatoes on the inside, and some of the most tender, mouth-watering meat that I have ever had the pleasure to ingest. The pork was set-off with pungent house-made sauerkraut and a few crispy, sweet onion rings. For our second entree, but not part of the pre-fix option, we tried the famous $32 foie gras and spare-rib stuffed DB Burger, which comes out at least 5 inches tall, accompanied by an overflowing silver goblet of crispy pommes frites. The burger itself is made of excellent-quality sirloin, though it was slightly undercooked (why is it these days that the new medium is actually rare??) and it had excellent flavor, though I mostly tasted spare ribs and mustard, and not foie gras or truffles, oh well. The fries had excellent flavor, though they were mostly cold.

For dessert, we had the Smokey Chocolate tarte that was offered on the pre-fix. It was so rich it was basically a chocolate stick of butter, and was way too much for me! To take it one step further, it came with a dollop of dark chocolate mousse (stop with the artery-clogging already!) and a nice scoop of peanut ice cream (ugh!). To put it in perspective, when I have a beautiful French dessert in front of me, and I only eat about two or three spoonfuls, something is obviously wrong! In contrast, a basket of fresh warm Madeleines ($8) were light, airy, and lemony with the perfect amount of sweetness. We barely touched the tarte, but ate every one of the Madeleines. Also, a nice dish of Petit Fours was brought to the table, with an excellent macaroon, fruit gelee, and salted caramel. Coffee was very good, with lots of refills.

As a side note, in the mornings, DB serves some of the greatest buttery croissants (we love the chocolate and the raspberry) and strong coffee this side of Paris. The croissants are also served with French butter and out-of-this-world Alsatian jam from Christine Ferber, the Jam Fairy.

Immaculate. We especially love the marble bathrooms, though wish there were more of them.