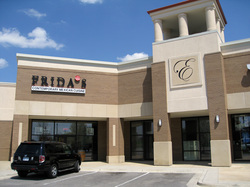 Like Mexican food but tired of the same old thing? Frida's is an excellent alternative, with interesting and eclectic choices and fantastic margaritas! Sure, it is a little pricier than what you usually expect at a Mexican restaurant, but don't think of it that way. The food is inventive and delicious, and you may learn a thing or two about Mexico while you're there. Delicious and smart- what a great combination! Try the Guacamole Duo, Tacos Placeros, Chile en Nogada, and Margaritas on the rocks. 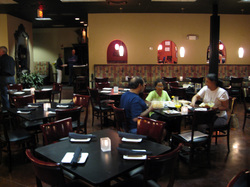 Tucked away in a quiet mini-mall, Frida's can be quite a trek to get to, especially if you live closer to Downtown, like we do. But, hearing of the contemporary Mexican cuisine, and hoping to get something a little different from the taco-and-burrito norm, we thought it was worthwhile to make the trip.

Once inside, the large cavernous space was bustling on a Saturday night, making it nosier than we like, but full of energy, nonetheless. The décor itself is not much to speak of, basically what I like to call generic modern, with a small bar sitting separately off to the side, for those who want only to imbibe. In the dining room, simple black tables are set with black silverware rolls and square white plates, and along the sides colorful fabric banquettes add a splash of contrast against earthy ochre-colored walls. We suspect that music was playing, though we couldn't hear it above the din.

Our service at Frida's was not perfect, silverware was missing, courses were brought while other dishes were still on the table, things like that, but our server was friendly, polite, informative, and seriously interested in our dining experience. Throughout our dinner, he told us about traditional Mexican dishes, how the food was made, and he checked in on us often. He acted like a part-owner, seeming totally invested in our meal. "That", I said, "is how service should be".  A+ for effort. Now, if he could only get his co-workers to do the same. 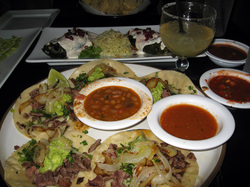 Always wary of restaurants that claim to be different, especially ones in mini-malls, I eyed the menu with suspicion though, I must say, it was full of interesting choices. To begin, the Guacamole Duo ($6.99) was the best I'd had in the Midwest. Simple and fresh, one was plain, and the other slightly sweet with pomegranate and apple. Both were chunky. They were served with warm tortilla chips.

Our second starter was Emolades ($7.99), layered corn tortillas with chicken, cactus, and mole' sauce but, unfortunately, we found the  mole' watery and uninteresting and the tortillas soggy.

For entrees, Tacos Placeros ($13.99) was a huge platter of grilled steak tacos on corn tortillas, with guacamole, caramelized onions, and a side of smokey beans with ham. Besides the excellent quality, the steak had a lovely charred flavor and the tortillas were soft and warm. Combined with the sweetness of the onions and the cool taste of avocado, these were simply some of the best tacos we've ever had! Certainly, they are not the cheapest, like the $1street tacos we get elsewhere, but these were worth the price.

Similarly, the second entree, Chile en Nogada ($14.50) (Chile in walnut sauce) was simply fantastic. Two large, mild chillies were stuffed with beef, raisins, and nuts (this had almonds instead of walnuts), and topped with pomegranate seeds and a cream sauce that thick, sweet, and spicy. They were served with a fragrant and aromatic rice that balanced the spice and cream perfectly. The dish is truly Mexican, even its colors of red, white, and green represent the Mexican flag, though its flavors reminded me of Morocco. Either way, it was all delicious! The portions were very large, I took have of my Chile en Nogada home (with strict instructions to others not to eat it!)  and it was even better the next day!

For dessert, Frida's menu is severely limited, offering only flan and corn-milk ice cream. Thinking it sounded the more exotic of the two, we opted for the ice cream, ($4.99) but were disappointed by its overpowering sweetness. Bathed in a sugary thick caramel sauce and crunchy walnuts, I could only manage a few bites.

Frida's has a full bar and their margarita's are fantastic! Usually ordering cocktails just for a taste, we ended up having a few of these. Careful, though, they are strong and not too sweet- just the way I like 'em!!

Frida's is new and, so, immaculate at every turn, including the bathrooms. However, at the end of our meal, they cleaned some of the empty tables with a very strong cleaner, which was a little disturbing, and stinky!

Some of the service was a little bumbling, Ho-Hum décor, noisy at peak hours, limited dessert menu.