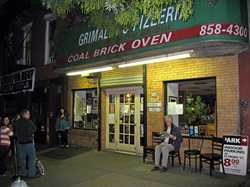 Grimaldi's was an interesting experience, with some of it good and some not so good. Even at 5:30pm on a weekday the place was packed, and when we left there was a long line out the door. So, who can argue with a place that's so successful?! Obviously, they're doing something right! Bottom line, don't go here if you want a quiet intimate meal or attentive service, the room was so loud we had to scream over the table, and waiters basically threw the food at us and the support staff were very rude. The pizza? Well, it was fantastic, if you can get over a soggy, wet crust.

The outside is humble and unassuming, looking like any old pizzeria. Inside, the space is nothing more than a square room, not tiny, but not large either. White wall, floors, and acoustic-tile ceilings make it rather plain. Tables are lined against the walls and set up in rows in the middle. All tables are very, very close together. Expect to get friendly with your neighbors. Tables are covered with red and white checkered tablecloths that, apparently, don't get changed too often. Ours was ripped and full of stains and crumbs, part of the charm, I guess. In the back, the famous coal-burning pizza oven and several cooks twirling pizzas and throwing toppings on dough with speedy efficiency. Very, very loud upbeat music plays overhead, ranging from the Bee Gees to Frank Sinatra. And speaking of Frank, the whole left wall is a shrine in his honor. The other wall has the obligatory pictures of the stars. Don't come here if you want peace and quiet. Between the loud music and the screaming children banging silverware on the tables, you have to scream over the table to be heard.

Grimaldi's is a NY institution so unless you go at a really off hour, expect a wait. We went at 5:30pm on a Thursday and although the place was crowded, were seated right away. Service here is casual to the extreme and basically rude and inattentive. Besides being ignored most of the time, servers rush by you or leave the table while you are in mid-sentence. Our server also forgot our drinks and never came to the table to check on us. Other employees ignored us and then snapped when we requested paper towels in the bathroom. Pizza cooks yelled 'no pictures!' when a customer tried to take a picture of the oven. I guess that in a restaurant where patrons continuously line up outside, no one feels the need to be nice. 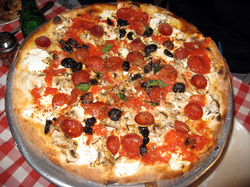 Grimaldi's is one of those places that claims to have NYC's best pizza so we thought it important to try. Like John's on Bleeker, they serve only whole pies, no slices, and take CASH ONLY. Pies come in small (16") or large (18") and you can choose your toppings. We ordered a small ($12) with pepperoni, mushrooms, olives, and garlic (toppings $2 each).

The thing that supposedly makes Grimaldi's special is the use of a coal-burning pizza oven, a technique that dates back to the first pizzerias in the early 1900's. The result is supposed to be a smoky flavor and crisp crust.

After about 20 minutes, the pizza came out looking beautiful. Steaming from the oven and loaded with colorful topping, probably the prettiest pizza I've ever seen. From the first bite, the quality of the toppings was apparent; the cheese tasted like real mozzarella, the pepperoni was thick and spicy, the olives were real black olives, not canned, and the garlic was fresh, aromatic, and pungent, there were even a few fresh basil leaves on there. I don't know if those were a mistake, but they were good.

Ironically, the only thing about the pizza we didn't like was the crust. Nice and crispy on the outer edges, it got soggy and mushy towards the middle. No, that is being to nice. It was beyond soggy- it was wet! Also, in the middle, the pizza was not hot at all. We would have sent it back to be rewarmed, but with such inefficient service it didn't seem like a good idea. I ended up eating all of the toppings and only the outer bit of the crust. The people next to us had the same experience so I know it wasn't just us. Too bad, the cold, wet crust really dropped it down a level for me. Otherwise, this would have been the best pizza I'd ever eaten, hands down!

We also had a glass of red wine, and a Brooklyn Lager ($4 each). The wine was pretty bad, tasting like it could strip paint, but what do you expect for $4?! The lager was really nice, though, light and crisp, with notes of apricot and honey.

Grimaldi's is an old 'dive'. Cleanliness is evidently not a priority. Though the food preparation area seemed fine, the tables and bathroom were not too great. PS. There is only one bathroom for the whole restaurant.

Pizza toppings were the best I've ever experienced!