New York's oldest and most famous deli, opened since 1888, Katz's is a true testament to the idea that some things are better left alone. I love that Katz's has not bowed down to pressure to modernize and that it is the same, well-weathered, in- your-face deli that it's probably always been. Obviously, other New Yorkers feel the same, as the place was packed, late on a Sunday night.

The food was different than I've had in other delis, and I've eaten in many, from LA, to Chicago, to Miami, but just because it was different did not make it worse, or better. It was just, well, different. The Rueben itself was not my favorite version, but the corned beef was to die for. Likewise, the brisket sandwich was dry, but the meat was lean and had nice flavor. The fries, coleslaw, and pickles were all good, and the egg cream excellent. The bottom line? Katz's is a true NY deli. If nothing else, the experience itself is most of the fun. Oh yeah, and the corned beef is fantastic! Also try the egg cream. Sit at the table where Meg Ryan faked her 'good time' in 'When Harry met Sally'. 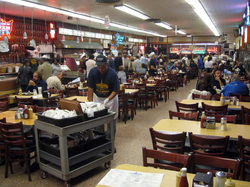 The space itself is reminiscent of a high school auditorium circa 1940, large, cavernous, and bright. It's old-style linoleum floors, high ceilings, and rows of tables with wooden chairs, combined with the long ordering wall and menu signs that have not moved for at least 60 years, make the place feel as it has been suspended in time. Kind of like the Twilight Zone of Delis. Even the ordering system is old-school: when you walk through the door you are issued a green ticket that you are called upon to show several times throughout your meal for servers and cashiers to mark and check with mystery. For God's sake, whatever you do, don't lose this ticket! Walls are lined with photo after photo of celebrity diners; next to our table were pictures of Jackie Mason, Jerry Lewis, Dennis Franz, and Liev Shreiber. In the dining room very busy servers rush around trying to remember orders and busboys fill huge carts with clanking dishes. Even on a late Sunday night the place was packed, noisy and bustling, and very, very cold. Bring a jacket.

You can order at a table and have a server, or order at the counter and seat yourself. Counter service seemed friendly, in a straightforward, no-nonsense NYC way. The table service was also friendly, though our waitress was so busy she forgot what we ordered a few times and seemed totally overwhelmed. It was difficult to get her attention, and even more difficult to get our check. We probably would have been happier with just counter service. 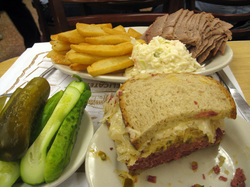 We wanted to do a direct comparison with Chicago's Manny's Deli but, unfortunately, Katz's was out of tongue sandwiches and the only way to get a potato pancake was with a full plate of 3, which was too many. So, we settled on the corned beef Reuben ($15.75) and open-faced brisket sandwich with fries and coleslaw ($15.90). The Reuben was unlike any I'd ever had before. The bread (rye) was fresh but not toasted or grilled. There was pickle relish, which gave it an interesting punch, but no Thousand Island dressing. The sauerkraut was fresh and not too salty, and the corned beef, 3 inches thick, was so tender, delicate, and delicious, it fell apart in my mouth. Overall, I prefer the sandwich as I've had it before, toasted and a little wetter with dressing, but there's no denying that this was the best corned I'd ever tasted. Perhaps this is a truer, more traditional Reuben than the others, I'm not sure. Maybe it would just take some more getting used to, I don't know. But, as I write this I am thinking, 'gee, one of those Rubens would be pretty good right now. So, that's saying something.

The brisket came to the table luke warm and very dry, meat sliced thin and piled high on a plain piece of rye bread. The coleslaw that came with it looked gloppy and like it had too much mayonnaise but it tasted good with a nice spicy bite of fresh horseradish. Put on top of the meat, it made the sandwich a little less dry. The fries were cut thick and were crunchy on the outside, and piping hot and soft on the inside. Nice fries! The sandwich, which I could have done without on the night we went, made a very nice snack the next morning. Dry or not, the meat had great flavor and was nice and lean.

To go with the meal I had a traditional vanilla egg cream ($2.75): seltzer water, vanilla (or chocolate) syrup, and milk, whipped into a frothy, semi-sweet soda concoction. I first tried one of these 25 years ago in NYC and have been in love with them ever since. Like a cross between bottled soda and a milkshake, but fresher and less sweet.

Also brought to the table was a bowl of fresh pickles, traditional dill, and a fresher, less-salty version. Both were cold, crunchy, and excellent.

Clean enough. The bathrooms were a little on the worse-for-wear side and they we the tiniest, most cramped bathroom stalls I've ever seen. They were moderately clean.

Hurried and forgetful table service, sandwiches can be dry if you are not used to this type of food.