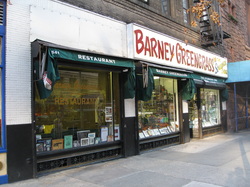 Sure, it's not all perfect, the service is a little abrupt, the credit card policies are a little sketchy, but there is no doubt that what Barney Greengrass does well it does really well. The triple-decker turkey and chopped liver sandwich was the deli-delight of my dreams. It may clog up the arteries but that doesn't stop me from craving it over and over again. And, the best part? It lasts two meals, making it delicious and economical. The Nova Scotia salmon was heavenly and the bagel divine. If you go, go early, and bring cash just in case. Brace yourself for bad service, and bring your sense of humor.

Try the Triple-decker turkey and chopped liver sandwich, matzoh ball soup, chopped liver, any of the smoked fish, and bagels. 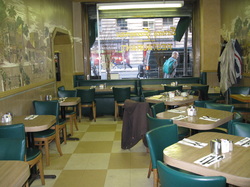 The quintessential old-style deli, Barney Greengrass has a wonderful no-frills deli counter and store in the front, filled with goodies from rugelach to lox, and a quaint little restaurant tucked off to the side. Boasting maybe 12 tables, the dining room looks as if it stepped out from time, with 50 year-old wallpaper (what is that, new Orleans??), thick formica tables with rounded art deco corners, and dark green leather chairs and window banquets. Overall, the old grey-green color scheme is soothing, friendly, and familiar, something TV's Mad Men could only hope to recreate. Having grown up in delis like these, I feel immediately at home here and every time I go in, I say a silent prayer that some things never change. The best part about it? Barney Greengrass is not as commercialized as, say, Katz's Deli and so you get the real authentic deli adventure.

Service here is a little rough, to say the least, sometimes funny, and other times way off the mark. Personally, this is what I expect at a deli; I think of it as a diner with attitude, part of the true deli experience, but others may not see it that way. Although coffee was refilled promptly and the food brought quickly, the food is slapped down on the table,  and the coffee poured all over the cup, and saucer, with no offer to clean it up. The table next to us wondered if the servers were actually required to go to bad-waiter school, as if it were more of an act than reality. After all, schtick is part of the Deli charm.

But, it goes beyond that. One time we went orange juice was pushed to the point of distraction, (for the third time, we said NO) and we were not allowed to sit in the window banquet even though the restaurant was empty and they were closing soon.  Things like that can make it a less-than-desirable experience, especially if you're not expecting it.

So, if you go, expect the worst and take it all with a grain of salt. As I said, I take it as part of the experience. In fact, instead of making me angry, it usually makes me smile. Also, credit cards may be accepted, or not. We still have no idea why. And hours are not always those that are posted. Our advice? Bring cash, and go early. And bring your sense of humor. 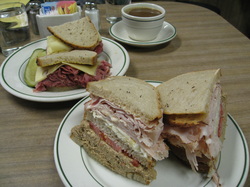 Let's face it, deli food is not for everyone. But, if you like deli food, grew up on deli food, crave deli food, then you're in for a real treat. Although known for it's smoked fish (Barney Greengrass is also known as the Sturgeon King) the menu here is filled with all kinds of deli delicacies that will have your mouth watering: triple-decker sandwiches, smoked fish platters, soups, chopped liver, herring, bagels, blintzes, you don't know where to begin.

The first time we went we ordered 2 sandwiches. The one that caught my eye early-on and wouldn't let go was a triple-decker turkey and chopped liver sandwich, on rye, with coleslaw and Russian dressing ($12.75) It came out dominating the plate, sitting at least 6 inches high. The turkey was thinly sliced and piled on, and the chopped liver layered 2 inches thick. The coleslaw added a nice crunch and wetness and a slight tang of horseradish, and the Russian dressing putting in a little sweetness. The rye bread was not toasted but was perfectly fresh. Altogether, this was one of the best sandwiches of my life. A perfectly-composed Jewish Deli dream! I wasn't sure how turkey and chopped liver would co-mingle, but I am now a devout fan! Despite being very hungry, I could only finish half of it. The other was carefully wrapped in old-school-style in waxed paper and put away for my next meal, with the threat of death going out to anyone who might even think of eating it before I did.

The second sandwich, a sliced tongue with swiss, also on rye ($11.75) was not as successful. The tongue tasted cured, like pastrami and, again, the bread was nice and fresh. There was a nice sharpness of mustard and, although there was nothing wrong with this sandwich, it just wasn't as spectacular as the first. Both sandwiches came with the prerequisite dill pickle which was nicely cold and crunchy, without being too salty.

On this day we also ventured out and tried a potato knish ($3.75) which we found heavy, dense, and kind of musty-tasting. Never having tried a knish before I am not sure if this is the way it is supposed to taste, but it was not our favorite.

On our second visit, we tried the smoked salmon appetizer ($13) which came out as several slices of beautifully-smoked salmon, not as salty as lox, with a fresh-from-the-garden-tasting slice of tomato, sliced onion, a block of cream cheese and a few black olives as garnish. With the salmon, a perfectly double-toasted garlic bagel. What can I say?! The salmon was heaven and the bagel amazing. The server steered us away from the lox, saying it was very salty, though I think next time I may ignore him and go for the lox. Once the bagel and cream cheese kick in, the salt is both welcome and not as noticeable.

With the salmon, a nice hot bowl of matzoh ball soup  ($5.50) that was light and not too salty. The matzoh ball was fluffy and airy. I'm not sure it cured my cold, but it felt good going down.

On both visits, I had coffee. Served in the old diner-style off-white coffee cups with the thin green stripe (it tastes better that way) the coffee is always hot, fresh, and endlessly-poured. Be careful, you can walk out thoroughly-buzzed.

Although the restaurant is a bit worn (it is 100 years old) it is generally clean. Bathrooms are fun old-tile but could be a little cleaner.

Hit-or-miss service (and not just the coffee pouring), inconsistent credit card policies and hours of operation, knishes that tasted old and stale, dirty bathrooms. Potato pancakes are available on weekends only.