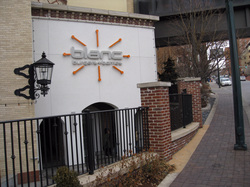 Although our meal at Blanc was not perfect I still enjoyed the concept, the atmosphere, and the food. It was fun, upbeat, casual, and different, and it's a good place to go it you don't want to spend a lot of money but still want a fun night out with good food. Make sure you order the burgers the way you like them, watch out for raw onions or projectile blue cheese, and you should be fine. We will probably return on a weeknight when it's not so crowded or noisy, but I am confident we will return. In fact, I'm already daydreaming about my next milkshake! Try any of the gourmet burgers, and a milkshake.

Blanc Burger originally was located in Westport by has since relocated in the Country Club Plaza. They also have a restaurant in Leawood (10583 Mission Road).

Their new menu now includes New York inspired cocktails and the $100 Burger with truffle oil, a take-off of the famous DB Bistro Burger minus the most expensive ingredients (ie: foie gars, shaved truffles).

We went on a Friday night and, as expected, Blanc was very crowded, even at a late hour. The line to be seated moved quickly but we had to stand over peoples' tables as we waited, which is always awkward. The manager shouted our names when our table was ready. He called me 'honey', which I am not particularly fond of.

The music in the restaurant was some kind of rock that I couldn't make out because, apparently, there is a bar with live music right underneath Blanc and the sound coming from there permeated the restaurant. Seriously, it was so loud, my seat was vibrating!!! But, after a while, I got used to it and the vibrating was not all that horrible. Next time, though, we will aim for a night when there is no live music downstairs.

Service at Blanc is very casual. Servers run around in what I think was a uniform of white shirts and khaki pants, though each one looked very different. Our server was nice, though he neglected to mention the "Adult milkshakes" (apparently, the menu was being revamped?) or any of the food specials, which I consider to be lazy service. But, he was altogether friendly and accommodating. 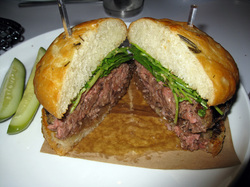 Although Blanc has several things on the menu, including salads, calamari, and mahi mahi, you really come here for the burgers, and Blanc has several creative and fun varieties to choose from. We chose a 'Classic' ($11), with white cheddar, homemade pickles, and red onions, and an 'Inside Out' ($11), stuffed with blue cheese, and topped with an onion ring and applewood-smoked bacon. Both burgers were made of exceptionally high-quality beef which is apparent from the very first bite, and the brioche buns were delicious. They come with a small tray of homemade ketchup, mustard, and chipotle sauce, all of which are good.

On the classic, I am not a huge fan of raw onions and the red onion on this burger is shredded and, so, impossible to remove. My mistake. Other than that, the burger was excellent. The stuffed burger doubled as entertainment  when my partner bit into it and hot blue cheese shot across the room as if discharged from a catapult, missing our neighbor's foot my mere inches, and discharging a sticky white goo all over his arm and across the table. Good thing he was wearing a dark cotton shirt. When we asked the server for napkins to clean up the mess, he retorted, "oh, yeah, I should've warned you about that." Um, yeah! Unfortunately, that blue cheese burger was also very raw inside, so we sent it back for more fire. It came back 5 minute later, charred. But, actually, it still tasted great and we finished every bite. (Word to the wise: the menu says all burgers are cooked medium unless otherwise specified, however, we found both burgers to be underdone, especially the stuffed one so, if you like your burger more than med-rare, you might want to say so when you order.)

To go with our burgers we ordered truffle fries, french fries sprinkled with truffle oil and, although the truffle oil smelled amazing and delivered nice taste, the fries were overcooked and too crispy for my taste. They also serve regular fries, sweet potato fries, and onion rings. Next time we will try one of those. I also noticed a 'sweetbread nuggets' special which sounded both fascinating and grotesque but, unfortunately, I was too busy with hamburgers and fries to try them.

For drinks, we had a pear cider which was really apple cider flavored with a little pear (if you know cider, you recognize the difference. Unfortunately, no one else does because it was listed as pear cider, but was really 'perry' cider, anyway...) and I had a vanilla milkshake ($5) made from Foos Fabulous Frozen Custard and local Shato milk. The milkshake appeared in an old-fashioned metal  container and it was so thick I had to use a spoon. The delicious flavor of vanilla and cream was in every spoonful! This was definitely the highlight of the meal. And, even though I am sure I consumed an entire day's worth of calories and fat in that one milkshake, I find myself reflecting upon it, often, adoringly.

Blanc also has 'grown-up' milkshakes made with liquor, but we didn't try one. They had a chocolate and chipotle one that sounds amazing. Blanc also has a huge selection of beers and wine at very reasonable prices, and a fun and eclectic selection of sodas that you can drink alone or have in a float.

The restaurant, being brand new and having minimalist décor, was spotless. The bathrooms were cool, too, with nifty wallpaper in bright colors.

The burgers are great quality and everything on the menu is reasonably-priced. The milkshakes are dream-worthy! The atmosphere is different and fun. The vibe is very upbeat.

The fries were over-cooked and the burgers under-cooked. The blue cheese burger shot out a hot wad of goo all over our table.  If you go on a weekend night it will be busy, and noisy and your seat might vibrate, so be prepared.