Blue Koi is a good place to go if you want a casual, reasonably priced meal that's not your basic fare, in a setting that's both colorful and eclectic. Try anything with house-made buckwheat noodles or dumplings (though we did not have any dumplings for this review), bubble tea. 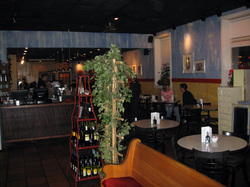 The eclectic mix of bright blue & yellow walls, terra cotta floors, color-washed photographs, and traditional Asian accessories immediately set the tone of this casual, hip eatery. Alternative rock music plays in the background, just loudly enough to give the room an energetic vibe, and young servers bustle around in black t-shirts and short red aprons. Tables and booths are set up to the right of the entrance and run all the way down the right-side wall. To the left and in the back is a long service bar with stools and hanging pendant lamps where patrons can get a quick bite or simply watch the activity of the open kitchen behind the counter.

The service at Blue Koi is very casual, though friendly and efficient. Our waiter disappeared at one point but 2 others showed up to check on us. Food arrived promptly, though I wish our drinks had come before our starter and not after. 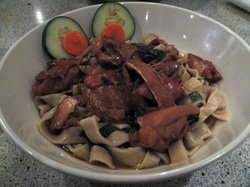 To start, we ordered the basil chicken lettuce wraps ($6.50)- 3 large leaves of iceberg lettuce served with a mound of ground chicken, basil, peanuts, carrots, and scallions that you wrap yourselves. The dish was both sweet and spicy, and pleasantly crunchy, which I like, though nothing really spectacular.

For entrees, I had my old favorite, Ginger-Basil Chicken ($11.50), dark pieces of chicken and large slices of fresh ginger in a spicy-sweet sauce, served over white rice or house-made buckwheat noodles in a huge white bowl. The nice thing about this dish, besides the sheer enormity of it, is the dark meat is very moist and tender and falls apart in your mouth. I also love the fresh ginger pieces and fresh basil leaves, and the noodles were excellent. On the downside, I thought the sauce was too sweet, and overall, the dish did not have the spicy zing that I remember it having before. The sweetness of it made me only eat half of it. Though I can say it was delicious when reheated as a leftover at home :) The other dish we tried was the braised pork with shitake mushrooms ($11.50), served with noodles, rice, or noodle soup. We had the soup. It also came in a huge white bowl, garnished with bean sprouts, cilantro, scallions, and greens. And although the pork itself came in huge chunks that were tender and flavorful, the overall soup was a little boring. We probably would've been better off with rice or noodles.

For drinks we had bubble tea ($4), considered by Blue Koi to be their specialty drink. For those who have never tried bubble tea, it's basically sweetened flavored tea, served cold, with large, chewy  tapioca pearls that you suck up through a wide straw. It may take some getting used to, but I have always loved this tea since the first time I tried it in Japan. Bubble tea comes in a variety of flavors, ranging from green apple, to peanut, to sweet red bean. It is served in several versions at Blue Koi, including warm, which I've never tried. Whichever way, it's a delicious treat, and the best I've had in the Midwest. Because the bubble tea is sweet, we skipped dessert.

The overall impression of Blue Koi was a that it was a little disheveled, a little  worse-for-wear, though not dirty by any means. We rescued our own silverware between courses and placed it on napkins so it didn't end up touched and on the bare table-top, but that's not unusual for this kind of place.

The food here is different from most other Chinese eateries and the atmosphere is colorful and energetic. The food is reasonably priced and the portions large.

The soup was a little boring and the ginger chicken too sweet.