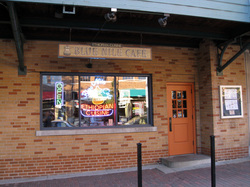 Ethiopian food is good, seriously good, and definitely underrated, it's not anywhere near as familiar to us as, say, Chinese, or Mexican. So, it would seem to me that in order to get people to come try it, a restaurant like this would do everything in its power to get people to come in, and yet this restaurant tries nothing at all. The atmosphere is dark, dull, and indifferent, the service is like a diner, and the food is good, though not great. The fact that the Blue Nile is still open is a testament to how many people do like this food and will keep coming back. Why? Because it's the only place in town! In my mind, I see a cool, fun, ethnic hot-spot like no other in KC, where people can come and have a great Ethiopian experience, not just a so-so meal. Unfortunately, it is only in my own mind's eye. And, until someone sees it like I do, I will keep dreaming… 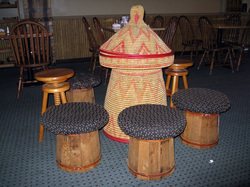 When I walked into the Blue Nile I was immediately disappointed with the décor. What could, and should, be a fun, lively, festive, and unusual experience is instead dull, flat, lifeless, and boring. In fact, my biggest complaint about Blue Nile is that is suffers from a severe identity crisis, looking more like someone's dirty, dark living room than the cool, hip, ethnic restaurant it could be. The floor is carpeted with dingy, dark blue wall-to-wall carpeting, the tables and chairs are nondescript blond-wood that look more Swedish than Ethiopian, the walls are cell-block grey, the lighting is dull and overhead, and, to finish the whole look off, there are several African-type posters framed and randomly hung on the walls with no rhyme or reason, or aesthetic consideration. Let's put it this way, if I weren't so in love with Ethiopian cuisine I would've taken one look inside, turned on my heels, and run away as fast as possible. The one saving grace, the authentic music that was played at a respectable volume and gave the place some semblance of atmosphere. Also, there was a small traditional woven table in the center with several stools around it, which looked like a fun place to maybe have dinner if it weren't so randomly plunked in the center of the restaurant, like an abandoned, waterless fountain.

The service was fine, efficient and friendly, yet a little more diner-esque than it should be. Our waitress, although nice, wore a dirty apron and slovenly t-shirt, and chatted to us for long periods of time, something I could do without. 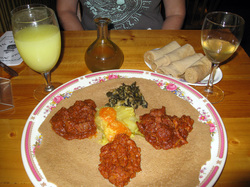 I love Ethiopian food, I really do. And, when I have it I always pine for a lot of things on the menu. So, on this night, my boyfriend and I ordered the Meat Combo plate, ($18.95) which featured 2 meat dishes, one beef and one chicken, and 3 vegetable dishes, potatoes, lentils, and collard greens, thinking we would get a lot of food.

Unfortunately, the first thing we noticed was that the whole plate was not very big or, shall I say, there wasn't much food on it. On the bottom was a large injera (the Ethiopian bread made with teff, or rye-like flour) and on top was a small scoop of each item, maybe a 1/4 - 1/2 cup of each. On the side was more injera for us to scoop the food up with. We did not use utensils, although they were available (but not offered).

The chicken and beef were good, although they tasted very similar to one another. Maybe one had a little more heat than the other but, overall, it was difficult to tell which was which. They both had a nice red color and stew-like consistency. I could taste cardamom and ginger. The lentils and greens were also good; the potatoes were, well, potatoes. The food was a little on the tepid side and maybe could've been warmed up a bit more. By the time we were done it was downright cold. The injera was good, spongy and fermented. I could eat that stuff forever.

For drinks we had 2 unusual choices. I had a 'ginger juice' ($3.95) that was sweet and spicy. I love ginger, and this had that slow, sweet burn that I like. My boyfriend, however, did not feel the same, which was fine by me because I drank it all. On his end, he had the Birze, or Ethiopian honey wine ($6.00), which tasted like sweet, flat, beer. It was good, and had an interesting flavor, but I would not run out to buy it anytime soon. Still, it was nice to try something unique. We were not offered coffee or dessert, nor did we try any.

Overall, the restaurant did not seem too clean. That could've been due to the 2 babies that were at the table next to us and threw food on the floor, as babies do. But, as we were leaving, our waitress was down on the floor picking up the food on the floor with her bare hands. Good thing that was after we ate, or I might've lost my appetite.

The food and drinks were good and the service friendly. It's the only Ethiopian place in town.

The atmosphere leaves a lot to be desired, and it could be cleaner. The food was not warm and the portions were small.