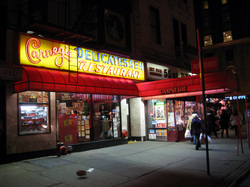 Though Carnegie was not the best deli food we've had, it was a fun experience. The size of the sandwich alone was enough fodder for many memories to come, especially for the kids. We like that the atmosphere remains authentic and unchanged with time. The egg cream was delicious and the cheesecake divine, though next time we will definitely go for the strawberry version. Try any huge triple-decker sandwich, egg cream, or cheesecake. 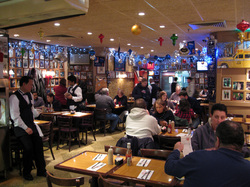 Though one of the oldest and most famous deli in NYC, Carnegie has stayed true to its original form keeping everything pretty much as it has always been. Tables are small and close together, the floor the original linoleum. Pictures of stars line the walls and create a wall-of-fame like no other. Though Carnegie gets very busy, the rooms are small and the noise is subdued, it is far from the cavernous cacophony of, say, Katz's.

Service is efficient and professional, but without the tiring schtick of some of the other delis. Then again, there wasn't much personality there either. 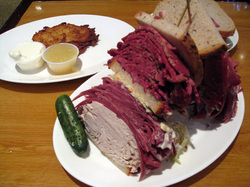 Though the menu at Carnegie is long and varied the portions are so large you do not need to order much. We ordered one triple-decker sandwich called Leo's Delightin, which had turkey, corned beef, tongue, coleslaw, and Russian dressing on rye bread ($22.95). It came out so huge it was almost unimaginable. It looked like a cartoon parody from Dagwood or the Flintstones, several inches high and leaning heavily to the inside of the plate.

The bread was a little dry but very fresh-tasting. And the meats were excellent, especially the turkey, though the corned beef fell a little short of some of the others we have tried around the city. Overall, the sandwich was quite dry. We ordered an extra side of dressing, and that made it a little better. In the end, that one sandwich fed 2 adults and 2 kids, which we think is quite impressive, none of us being small eaters.

The pickles, which come complimentary to the table, were deliciously crisp and garlicky. We also had one potato pancake ($4..95) with sour cream and apple sauce, which was fried perfectly, but had a mealy, doughy taste that I wasn't fond of. We shared a wonderful vanilla egg cream ($2.75) that had us bickering over who had the most sips.

For dessert, we couldn't resist the famous cheesecake ($8.95) which was the heaviest, thickest, and stickiest sour cream cheesecake we'd ever eaten, like a brick, but in a good way. I wasn't fond of the dense, floury crust, but the cheesecake itself was excellent. I thought we would never finish it, but somehow, we managed. And, although I usually abscond from things like strawberry topping, I think strawberries would have balanced out this cake perfectly, and cut the thickness a little. Plus, the strawberry version looked fantastic!