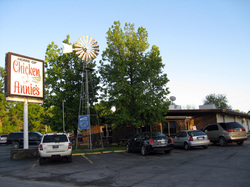 Chicken Mary's and Chicken Annie's are rivals, and only a few doors from one other. We traveled to Pittsburg specifically to compare and contrast the two and, therefore, this is a dual review.

So, the big question is: Chicken Annie's or Chicken Mary's? Like most places with a loyal following and a local rivalry, most people have their favorites. For us, there were things we liked about both places, and things we didn't like. Chicken Mary's has that great, fried coating that was delicious, but a little overwhelming. On the other hand, Chicken Annie's has almost no coating, but a leaner, more moist meat. Too bad there couldn't be a middle. Still, on the whole, with atmosphere, sides, and service considered, I believe that Chicken Annie's is the better of the two. The most telling fact? After eating at Chicken Mary's I felt full, tired, and, sorry to say, a little nauseous. After Annie's, I was wishing I had a few pieces to eat in the car on the way home. 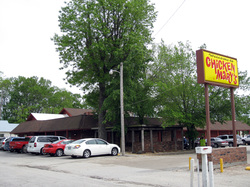 Both Chicken Annie's and Chicken Mary's were re-built in the 70's, and both are simple, vast dining rooms without much character or décor. Both have large quantities of plain makeshift tables, and heavy metal-framed chairs, though Chicken Mary's offers a little more booth seating. Chicken Annie's has more personal touches, like a large collection of chicken tchotchkes, and cute chicken curtains. Both play country music. Both had filthy carpet floors, after a long Sunday of messy chicken eaters, no doubt. 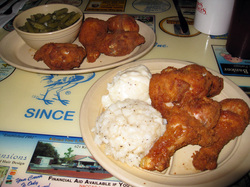 Most of the servers in these two restaurants appeared to be young college students, and nothing is polished or refined. At Chicken Mary's our service was pleasant, though nothing remarkable. A young food runner brought onion rings to our table and just stood there, food in hand, without saying a word, until we prompted him to put them down on the table. At Annie's our young waitress was extremely hospitable and accommodating, until we realized she forgot to put our order in. What should have been a 20 minute wait turned into a 45 test of patience. While other diners came and went, there we were, waiting.

At first, we were told that the kitchen had 'miscounted the chicken', which we were totally confused about. What do you mean miscounted the chicken? How hard is it to count to 8? Later, we learned that she had actually forgotten to put our order in. Still, she was very nice about it and ended up comping half of our meal. As we left, the two managers (or were they the owners?) tsk-tsked her in front of us and advised us not to leave a tip, but we did anyway. Anyone can make a mistake.

Besides, what is more reprehensible, a server who forgets to put in your order, or a manager who badmouths their employees in front of customers? Hmm. Either way, at both places, the service was not as friendly or personable as you might expect in a small town like this 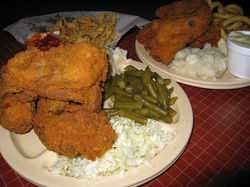 So, here's where it gets interesting, because it's the food, after all, that draws the crowds, and not the décor.

Both menus are practically identical, with only minor variations of sides, chicken pieces, and prices. At Mary's, we found the chicken to be very thickly coated, with large chunks of delicious deep-fried skin and batter practically falling off bone. ($7.55 for a plate of 3 large and 2 small pieces of dark meat, with 3 sides) If you love coating, this may be the chicken for you, though after a few bites it became a little overbearing. Also, the meat on this chicken was especially fatty. With only one piece finished I was ready to never eat fried chicken, or anything fried, ever again. For the sides, the mashed potatoes were bland, as well as the white gravy they came with, the Germain potato salad was vinegary and tangy, and the green beans soggy and tasteless. A basket of Mary's homemade onion rings ($4.50) were very thinly sliced and were also heavily coated, making them more like a basket of fried flour than fried onions.

At Annie's the chicken is much more lightly coated, which I wasn't sure about at first, but it grew on me ($7.25 for a plate of 4 pieces of dark meat, with 2 sides). Not having as much of that heavy fried coating, the emphasis is more on the chicken itself, which was leaner and more moist. The outside was still crispy and crunchy, but every bite was chicken, and not coating. The sides were also more successful, with green beans that were plumper and juicier (though still canned), and Germain potato salad that had just a little more flavor. The mashed potatoes were not great, and had a strong flavor of margarine.

Both restaurants serve a plastic basket of sliced white bread, and water that was so heavily-chlorinated we could not drink it. Coffee at Annie's tasted like instant, and was served with powdered creamer. Neither offered desserts or, if they did, we were not aware of it.

It could just have been because it was Sunday, but most everything was kind of grungy. Bathrooms were barely passable, floors were disgusting, and tables and seats were wiped but still kind of sticky. Chicken Annie's seemed the slightly cleaner of the two.

Great chicken, A beautiful drive in the countryside.