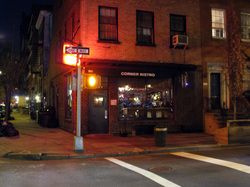 We are not sure why Corner Bistro has such a glowing reputation. Alright, the simple old-world bar thing is nice, it's cozy, warm, and inviting, the beer is cheap, and the music is good. OK, OK, we get it! But the burgers, which have gotten so much attention, were pretty much tasteless and, not to mention, dangerously undercooked. Even the fries were disappointing. What was most surprising was that by 6:30pm there was a line almost out the door! Maybe sitting around drinking $2.50 beers till 4am makes the burgers taste better, we don't know. But we're certain there are better burgers elsewhere. Try the McSorley's Ale ($2.50). 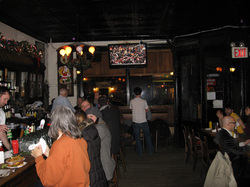 Corner Bistro is commonly referred to as 'The last Bohemian Bar in New York', and it is easy to see why. Open since the beginning of the last Century, not much has changed through the years, and the atmosphere is small and close but also warm, cozy, and inviting. Thick butcher's block tables butt up against old wooden benches that line the wall, Old tin ceilings hover high overhead. Turn-of-the-century light fixtures hang over the long well-stocked bar, emitting a warm, soft glow, and plain, unpolished wood floors lay underfoot. Over the speakers, everything from serious jazz to hard rock, all at an energizing, though not unpleasant volume. Music depends on what people pick out of the jukebox, though the selection is pretty great. Corner Bistro is neither fancy nor plain, but kind of just right- the place you'd like to have in your neighborhood so you could come often, and be a regular.

Service is very casual, as you would expect in a bar, though good enough. We had to track our server down a few times, but he was always pleasant. 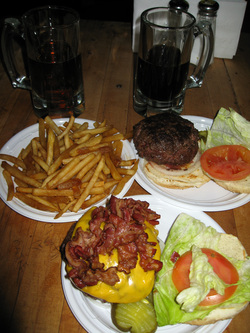 Corner Bistro is known for its burgers which is a good thing, because that's basically all they serve. The 'menu' is a small board off to the side of the bar and is one of those old letter boards that you find in a Tastee Freeze. On I was a Bistro Burger, a cheeseburger, a regular hamburger, a chicken sandwich, and fries. That's about it. We ordered a regular burger and a Bistro burger, both of which came out after a few minutes, looking thick and delicious and way too big for the very, very small plastic plates they came on. They were dressed with a simple leaf of iceburg lettuce, a few slices of raw onions, and an under-ripe  whitish slice of tomato. The Bistro burger had the addition of nice crispy bacon and melted cheese.

The first thing I noticed was that the raw onion was so pungent, I had to discard it after one bite. Several hours later I could still taste it in my mouth. Second, both burgers were seriously undercooked. The regular burger, which we ordered medium, was on the verge of being rare, but was still edible. The Bistro burger that was supposed to be medium-rare, was so undercooked it was basically raw meat on a bun. I sent it back and it reappeared after only few minutes, coming back better, but still raw in the middle. We're not talking rare here, folks, but RAW! A third time out, with me starving and the waiter pretty tired of us bugging him, it came back grey, well done, and totally dry and tasteless. OK, there might have been a tiny bit of pink in one bite way in the middle, but it was pretty much devoid of any flavor by then. In understand the not wanting to send out another raw burger, but there has to be some middle ground between raw and grey. In the end, I was very disappointed, and hungry.

The fries were also not very good. Coming on another tiny plastic plate, the order was very small and the fries themselves were over-fried, and had a strange but unmistakable taste of bacon... So much for fries being vegetarian!

The best thing about our meal was the $2.50 McSorley's that comes on tap in nice sturdy glass mugs. The beer is available in ale or dark and was delicious. Thank God for cheap drinks!

Corner Bistro is an old bar, and is about as clean as you would expect. The bathrooms were kind of scary.