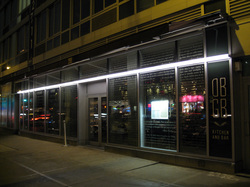 Daniel Boulud is one of the most celebrated and recognized NYC chefs for a reason, not only because he presents great food, but because his restaurants encompass the whole package, offering excellence in ambience, service, and cuisine. His newest installation, DBGB is no exception. The old-yet-new décor is a stunning example of modern design, and the food and concept is unique yet universally appealing. Although DBGB is supposed to be an amalgamation of French and American, we found that it is in the French dishes that the menu really shines, especially the Pied de Cochon Pane, or crispy pigs' feet, that were absolutely heavenly! Also try the beer, coffee, and honey-grapefruit ice cream. 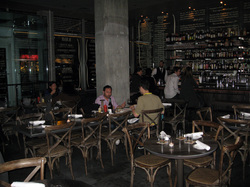 Although not all restaurants in the Daniel domain suit my particular taste, DBGB is an absolute stunner, leading the way for new standards in casual-chic décor. Outside, large windows that are covered in whimsical food quotations allow a modest glimpse of the tremendous floor-to-ceiling bar that lies inside. In that bar area, several casual tables allow for dining or drinking, or both. In the rear, the main dining area is done in a monotone color scheme of dark wood and cocoa which contrasts against the stark white dinnerware stocked on the surrounding open shelves. Also on the shelves are glasses, baskets, bottles, and the like, as well as a superb collection of large copper pots, each one donated by a famous chef and set off by a plaque announcing the famous donator's name. Within the boundaries of the shelves, plush chocolate leather booths and a few stand-alone tables offer comfortable and stylish seating. Small candles emit a warm, soft glow. The end result is an ingenious cross between an old culinary library, and a modern French bistro, both comfortable, and cool.

On the other side of the open shelves, though not easy to notice at first, is an open kitchen, where if you look hard you can catch a view of chefs preparing the food. Over the speakers, upbeat folk music (think Van Morrison) and mellow alternative rock plays at an energetic level. The music is an important part of the vibe.

Service here seemed icy at first, though warmed up with encouragement. Everyone was efficient and well-trained. 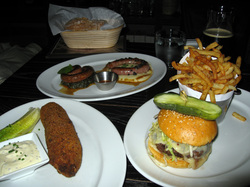 The menu at DBGB is a casual but eclectic blend of French Brasserie and American tavern, and has a nice mix of burgers, sausages, and other meat-centric items including, but not limited to, tripe, pig's blood, marrow, tongue, and the like. The trick for us was to get a nice mix of the expected and the unexpected without filling ourselves to the point of explosion.

Our first choice was the fairly simple Yankee Burger, a 6oz. Patty with lettuce, tomato, pickle, and onion, on a sesame bun, with an added slice of cheddar for good measure ($14). The most notable thing about the burger, besides its  pristine appearance, is that the quality of the meat was exceptional. Although it was, in my opinion (like most burgers these days), too rare, its lovely charred taste commingled nicely with the soft, artisanal bread, and the dill pickle added a crunchy, though not too salty, coolness. The fries in their heart-shaped tin were crispy and hot. It was a very good burger, maybe not the best ever but, nevertheless, very good.

The next and progressively more daring entree was a duo of sausages ($24) including the Tunisiene (lamb, mint & yogurt) and the Chipolata (pork & truffle). Both sausages came sans bun and a lot smaller and more petite than I had anticipated. The lamb was both spicy and fragrant, served an a small bed of sauteed spinach, and the pork chewy and earthy, on a bed of pommes puree.

For our third entree, we went all the way with the Pied De Cochon Pane or, in plain English, crispy pig's feet with mustard sauce ($17). The meat came out in long, deep-fried logs that looked something like huge potato croquettes, only this croquette was made up of three distinct layers. On the outside, crispy, hot breading, underneath which sat a soft flavorful layer of fat. On the inside, tender, succulent meat that simply melted in your mouth. The dish was served with a crisp bit of Romaine lettuce and a mild mayonnaise-based dijonnaise sauce that cut the fat and gave a creamy, refreshing respite. Of the three dishes, this was by far the favorite and was the best example of where Daniel Boulud shines, in the simply unexpected.

To accompany our meal, DGB offers a superb list of handcrafted ales, beer, and lagers. We chose a Harviestouns Old Engine Oil Porter from Great Britain ($10) and a Pausa Cafe Tosta Barley wine with cocoa beans ($12), both of which were a refreshing and delicious change from the usual, and more expensive, cocktail list.

By the time dessert came around we really were too full to go all the way, but we did manage to stuff a few things down. A  creamy very pretty lemon tarte ($9) could have been a little tangier but came with an exquisite pomegranate sorbet, and a solo scoop of honey-grapefruit ice cream ($3) was sublime. Coffee was superb.

Immaculate, even the potentially-disastrous condiment caddies were without a single stain. The bathrooms, with Vintage fixtures and French cooking wallpaper, are fantastic.

Service can seem distant and icy, can be very crowded and noisy at peak times, severely undercooked burger.