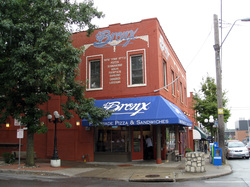 With its cool, old NYC vibe, the original D'Bronx achieves something that many restaurants do not: it is a theme restaurant without being theme park-ish or overly cute. With its tin ceilings, red leather booths, wood floors, and customer-graffitied brick walls, it genuinely feels like NY and, thankfully, not Disneyland and that, in part, is due to the fact that it is not perfect, new, or shiny which, in this case, is a very good thing. Oh yeah, and the pizza is awesome!!!!

There are also 2 other locations, one in Crown Center and another at Metcalf and 105th. 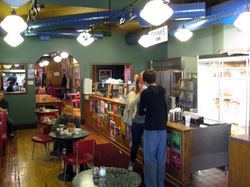 D'Bronx, as in The Bronx- a borough in NYC, is everything it should be: fun, upbeat, casual, cool, and a little beaten-up, just like NYC itself. Its not  pretty or new, but  has an authentic and comfortable vibe that you can feel the minute you walk in.

The restaurant is basically divided into two sections with the deli is in the front, and the pizza is in the back, although you order for both at the front counter. The first thing that hits you is the dessert case showcasing many nice-looking cakes, including carrot, red velvet, chocolate, and cheesecake. Behind that, the menu is displayed on a large hanging chalkboard and, along the deli line, you can see your sandwiches being made. There is also a soda case with mainstream, and not so mainstream, sodas, teas, and juices. I had a 'Lost Trail" diet root beer. In the back is the pizza oven, and you can see the pizza men throwing huge discs of pizza dough into the air and, of course, there are lots of oooos and aaaaahs as they do, and not just from the kids.

All through the restaurant is a nice selection of bistro tables and old red leather booths, and there is also one long community table in the middle. A majority of the walls are exposed brick and are filled with customer-written graffitti which is fun, except for a few unsavory postings (despite the management sign asking people to refrain) Many of the walls have tasteful, framed black and white photos, and one wall has an old wood and glass cabinet filled with empty white pizza boxes that look almost like art. Hanging vintage pendant lights, old wood floors, and a tin and exposed ductwork ceiling complete the NY feel. The music is vintage rock that is fun to sing along to.

The only bad thing I can say about the atmosphere at D'Bronx is that on the day we went it was raining and a little cold outside. Inside the restaurant the AC was blasting! We moved to another table but it was still freezing. We asked if the air could be turned down but the girl said she had been trying  to get it turned down all day, and then something about the pizza ovens. We didn't quite get what she was talking about but, whatever, it was cold! And, because the pizza takes about a half hour, it was a long and very uncomfortable wait.

The service is counter service and everyone seemed friendly, even if they couldn't get the AC turned down for us. The pizza took a long time, but that's understandable. Some of the tables were not cleaned promptly and people had to sit at dirty tables and ask for them to be cleaned.

D'Bronx has a large menus with a selection of deli sandwiches, hot and cold subs, baked eggplant, lasagna, and hot dogs. We only had the pizza. We ordered the 'D'Bronx Special', a 16" pizza loaded with sausage, ham, pepperoni, green peppers, olives, mushrooms, and onions, for $20.

Now, let me preface this by saying: I know good pizza! I was born in Chicago, I lived in NYC for many years, I used to work for Wolfgang Puck (the creator of the designer pizza) in LA, and I have been to Italy too many times to count. I have all the pizza bases covered. But, let me tell you, OMG! this pizza was sooooo good!!

The best thing about it was the crust, which was relatively thin and crispy and tasted like fresh, hot, doughy bread; in other words, it tasted the way crust should taste and not like some frozen, preserved, oily or sweet, fast food.

The toppings were heaped on. The sausage tasted fresh and spicy. The cheese, which was on top and not on the bottom, was hot and delicious. The onion was slightly sweet. The peppers were crunchy. The sauce was perfect. Every ingredient blended together in perfect proportions, none overpowering or outweighing the other. And, the crust was crispy all the way through the pizza, from the first bite to the last. This is true pizza heaven!!! The slices were so big and loaded I was full after one, but I could not stop myself from eating a second. I ate, and ate, and ate. It was delicious!

Our 16" pizza fed 2 kids and 2 adults, and gave us 2 slices leftover to take home. But, if that's not enough for you, there is also a 30" version for $75 that took up an entire table and looked like it could feed an army! They also serve pizza by the slice.

One more thing: I am not saying this is NY pizza, or Chicago pizza, or anything else. I know, the restaurant is called D'Bronx so, of course,  it is only natural to compare it to NY pizza, and I read many other reviews that debate back and forth whether it is authentic. Personally, it doesn't taste like any pizza I had in NY, but so what? It was still delicious. And, frankly,who cares?! This pizza was great by its own standards, it was featured on the Food Network as one of the great pizzas in the US. All I know is that it tasted good, really good, and that's good enough for me!

Too bad I didn't have any room, or extra buttons on my pants, to try one of the cakes…

In general, everything seemed very clean. The kitchens are out in the open so all looked good there. The bathrooms are decorated well, but looked a little worn, especially the men's, but they weren't dirty.

The atmosphere is cool, and the pizza is heaven! We especially loved the D'Bronx Special pizza.

I couldn't stuff in any more pizza! No, seriously, the AC was blasting and the pizza takes a long time. Bring a sweater and something to read.