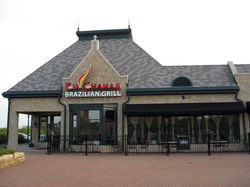 I first visited a Brazilian churrascaria in 1999 in Manaus, in the heart of the Amazon. The space was loud, large, very casual, and very satisfying. I went in with no expectations, and came out fully charged with excellent food and one of the most exciting culinary experiences of my life.  I remember thinking, "Wow! This would be great in the States!". About 6 years later, I noticed churrascarias popping up in places like LA and Seattle and, before I knew it, they were everywhere.

I am proud to have a churrascaria in Kansas City (we actually have more than one) and I am also glad that I can go and recreate, to some degree, my Brazilian experience without having to fly all the way to Brazil and/or sail halfway up the Amazon river (it's hot!) Of course, the American versions of churrascarias seem more upscale and sterile than those I've visited in South America, but they have their own brand of style and charm, and that is not altogether a bad thing.

Em Chamas is a nice change from the traditional American steakhouse. The food is good, the service fine, and the value, excellent. Most of all, the experience itself was fun, and different. Sure, I missed the sausage and Dulce de Leche, but I am now dreaming of the Caipirinhas. 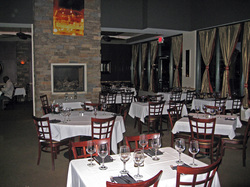 Tucked away in a large and very new shopping mall, Em Chamas exhibits all the accoutrements of a new space built especially for restaurant service. The vast dining room is dressed in dark colors and white linen and awash with sunlight from it's floor-to-ceiling windows. The A-frame construction and huge flagstone fireplace create a rustic and warm surrounding. The bar and restrooms are squeaky-clean, and the atmosphere is one of hushed silence. Altogether, it reminds me more of an Aspen ski lodge than a traditional churrascaria (the ones I've been to in Brazil have all been rather noisy and scruffy, which is part of their charm) but here in the US we like to have things the way we imagine them to be, not exactly as they are and, as in Em Chamas, the result is rather nice. So be it...

Service at Em Chamas is Rodizio-style, where servers (or, Gauchos) visit, and re-visit, your table with large skewers of various meats. You do have a main server, though, and ours was pleasant and efficient, if not totally informed. When we asked him why they were serving bananas instead of the traditional plantains he replied, "I don't know, I just work here." Hmmm. We were also seated off in a side room where, for some unknown reason, the tables were not set with cloths and we were completely segregated from the rest of the dining room. The restaurant was not busy, and we're pretty sure we didn't smell, so we have no idea what happened. We felt like the unloved cousins at a wedding. 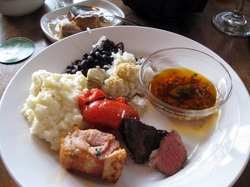 Although there are many choices at a churrascaria, the main idea, is simple: meat, meat, and more meat, and a little salad.

First, you are invited to visit the salad bar (a term used loosely in this case, as there is so much more than salad) which has a large selection of Brazilian and American items. Most traditional are hearts of palm, corn, chickpeas, carrots, roasted red peppers, and chimichurri (parsley, garlic, & vinegar sauce), accompanied by white rice, fejoada (black beans), and French bread. Some of the non-traditional dishes include American coleslaw, pasta, chicken stroganoff, ravioli, and mint jelly, which made me chuckle (only Americans eat mint jelly on their lamb, certainly not Brazilians). I was a little sad to see that Em Chamas had to cave in to American tastes and not keep solely with the Brazilian selections, but I understood.

Em Chamas offers 13 different cuts of meat, although on our night we saw only 9. Our favorites were the house specialty sirloin and the boneless ribs, both of which were charred to perfection and had wonderful, fatty, grilled flavor. Our least favorites were the chicken and turkey, which were spongy and salty, and tasted more like processed deli meats. The most obvious absence was sausage, which is normally a huge part of the churrascaria experience, but was nowhere to be seen.

In between meats, we were brought a small basket of warm, stretchy cheese rolls, which were nice, and very disappointing sauteed bananas in cinnamon and sugar. I am still not sure why there were no plantains.

To drink, a regular lime caipirinha (The traditional Brazilian cocktail of cachaça, lime, and sugar) ($7) was so delicious we ordered another. Be warned, these drinks are very strong, and may lead to wanton acts of overeating and general debauchery!

For dessert, I was craving a nice flan with thick, creamy dulce de leche (caramel), something I indulged in often in Brazil, and dream about on a regular basis. Unfortunately, neither flan nor dulce de leche was on the menu, so we opted for was a sampler trio ($7) of tangy passion fruit mousse, cloyingly sweet coconut brulee, and dry chocolate torte. We ate a few bites and left the rest alone.

Did I say squeaky-clean?

A little over-Americanized, mediocre chicken and turkey, no plantains or sausages, uneventful desserts.