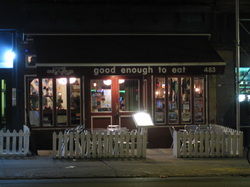 There's no reason why good, old-fashioned, American cooking has to be out of style. The concept for Good Enough to Eat is a solid one, and one that has garnished much praise in it's 20-some years of operation. I only wish that Good Enough to Eat could grow up a little. Get rid of the overly-cute cow theme, simplify the décor, give the food a little updated sophistication and, voila! You have yourself a great restaurant again. But, as it is now, I have to say Good Enough to Eat was a big miss. Too expensive for what it is, I can make a bland meatloaf at home, and it won't cost me $18.  Consider instead ordering the roast turkey, kale, and mashed potatoes but ask for extra extra butter. We hear that breakfast is the way to go here. Perhaps we will try again, only earlier in the day. 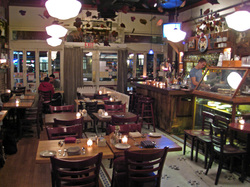 Filled with an overload of country kitsch, Good Enough to Eat is stuck in a time warp, but not in a good way. Cute country-style wood tables, an indoor picket fence, and a great mosaic and wood floor are all good on their own, but are overkill when combined with too much cow art, hanging leaves dangling from the ceiling, and cutesy-patooty knick-knacks on the shelves. To add insult to injury, moody acoustic guitar music was a touch too loud to be comfortable. The only thing missing was pumpkin pie scented candles (please, no!) GETE was surely all-the-rage in the 80's when it opened and it still could be if it would only take the adorableness of 'country' and tone it down a notch, or ten. What I loved? The turquoise leather benches, the framed botanical prints, and the open shelves with white coffee cups and vintage-looking glassware. Keep those, please.

Service is very casual, but friendly. 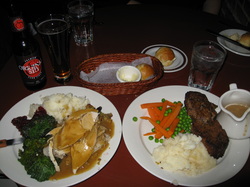 After passing this restaurant several times, looking at the menu, and peering in the window, we finally decided to give it a try. After all, what could be better on a cold Sunday night than good old home-style cooking? The menu is filled with all your perennial favorites, meatloaf, pork chops, roast chicken, steak, all served with delicious-sounding sides like mashed sweet potatoes, kale, and succotash. We ordered the chick pot pie but they said they were out. We finally decided on two dinners, the traditional roast turkey, and meatloaf (both $18.50) and skipped the appetizers.

To begin, a basket of warm, though uneventful, crusty dill rolls, was brought to the table, with nice, soft butter and, complimentary with both meals, a dinner salad of mixed mesculan greens in a mild mustard vinaigrette. The salads were simple, but perfectly-dressed.

When the entrees came, which was a little too soon for comfort, the meatloaf was dry and dense, and had very little flavor. The peas and carrots with it were unremarkable, and the mashed potatoes were bland until we put a dollop of the butter that was brought with the bread on them, and then they suddenly became fantastic. The turkey was wonderfully moist and tender, the cornbread stuffing a little rough, and the mashed potatoes, again, bland without the help of butter. The kale was sautéed perfectly in lemon. The cranberry sauce was so tart it caused a pucker. Overall, the food was just mediocre and, dare I say, bland. It's the first time I can remember having to salt my food in a restaurant in, well, ever!

Good Enough to Eat has a nice selection of homemade pies and cakes for dessert. Though not sophisticated, they look more than appealing in the display case by the bar. I immediately pegged a piece of lemon meringue pie ($7.50), though I probably could have been just as happy with the German chocolate cake. The pie had a perfect fluffy meringue and a nice flaky crust. The lemon was a nice blend of tart and sweet, though there was an unpleasant aftertaste of cornstarch after each bite. I left half of it on the plate.

Good Enough to Eat also has reasonably-priced beer and wine. We had a hard apple cider ($6) and a glass of Pennsylvania lager ($3.50) both of which were good.

The restaurant was very clean, though the bathrooms looked a bit worn, kind of like someone's house who didn't know you were coming.

A little too cutesy to be taken seriously. Food was hit-and-miss. Prices a little high for mediocre.