Gordon Ramsey at The London 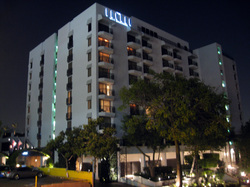 After being a fan of uber-chef Gordon Ramsay on TV, I was more than excited to sample one of his venues firsthand. Although the reviews I had read claimed this restaurant to be casual, inexpensive fare, I found it to be much more sophisticated, upscale, and expensive, which is fine, as long as you know what you're getting into. The décor is much more feminine and delicate than one would equate to Ramsay, yet beautiful and unique nonetheless. The food is fresh, complex, and adventurous with an ever-evolving menu. Overall, a wonderful dining experience, though you may want to go somewhere else for dessert. 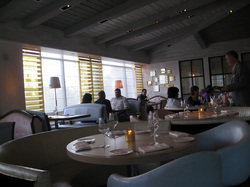 Being a Food Network junkie and watching show after show with uber-chef Gordon Ramsay berating this cook and that restaurant for everything from dishes to desserts, I was more than excited for the opportunity to experience one of his newest culinary venues firsthand.
Set in the most beautiful and recently-opened London Hotel, the stunning atmosphere immediately transports you back to the glamorous 1930's from you from the moment you drive through the ivy-covered gates, to your walk through the ornate black and white lobby where the marble floors actually seem to glitter. The modest entrance to the restaurant is tucked away to the left.

Once through the restaurant doors you enter a world of serene calm, as the host area is sheltered from the main dining areas and bathed in soothing, soft colors. The restaurant is deceptively large, with a smaller-sized dining area in the front, and an even larger dining room and bar area in the back. Off of this back area are several cloistered small rooms for private dining.

The front rooms are more feminine and delicate than I would ever have imagined for the roughness of Gordon Ramsay. Designed by Internationally acclaimed designer David Collins, cool pastel pinks and blues are complimented by white leather and accented with touches of ornate gold. Elaborate chandeliers and glowing candles give the rooms a quiet stillness. The intent is modern, sophisticated old Hollywood glamour, though I am reminded more of a (very rich) baby's nursery. Still, I can't say the room was unpleasant or unattractive and, if nothing else, it's originality is a standout among too many restaurants that follow the same mold. Shaded windows look out over LA, though the view is hardly noticeable.

The back rooms, although we only got a quick look, seemed a little more masculine and dark. The bar has long community tables that look inviting for a cocktail or two, especially if you are out to meet new people, and I admit to fantasizing about a small but sophisticated dinner party in one of the private dining rooms. If only I had the means!

The mostly male serving staff (though I did spot a few females) roam the room in ill-fitting grey suits. I am not sure when this trend started but I find it a little unnerving to be served by someone who looks like a jr. accountant, but maybe that's just me. Either way, we were served mainly by one server though throughout the meal several appeared at our table, one to pour water, one to ask about wine, one to clear plates, etc. Service was exceptionally professional and very friendly by LA standards, polite and soft-spoken, accommodating but never pushy, obviously highly-trained. 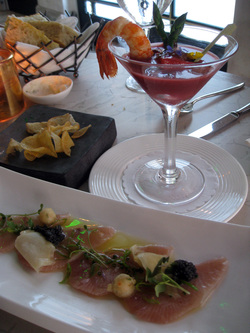 Gordon Ramsey at The London specializes in European/Asian cuisine based on local and seasonal ingredients, served either a` la carte or in a multi-course chef's menu. Having recently been to the French Laundry and, quite frankly, a little burned out on the tasting menu idea, we opted for the a` la carte, ordering several plates to share. (note: the restaurant recommends 4 to 5 plates shared between 2 people)

Instead of by course, dishes are arranged on the menu by price point, $14, $18, and $22. And, although I had read a review stating what a bargain these prices were allow me to forewarn that, with some exception, these servings are very, very small- a bite or two at the most, and what seems at first glance to be a relatively inexpensive night out can turn quickly into a very pricey indulgence if one is not careful.

We began with a hamachi carpaccio ($14), raw yellowtail sliced very thin with a citrus vinaigrette and dollop of caviar. The fish was extremely fresh, almost melting in the mouth. Combined with the slight bite of the citrus, the tang of pickled ginger, and the salt of the caviar, the taste was exquisite. Wow!

Next was a cherry gazpacho ($14) made with tomatoes, heirloom watermelon, and asparagus tips, topped with an edible flower and large prawn. Coming in a large martini glass, the soup was the color of melted sorbet, dark berry pink, and had the interesting combination of a berry flavor up front and a tomato flavor finish. Cool and refreshing, very interesting, though not much food. The prawn on the top burst with fresh flavor.

Third was a beautifully rolled slice of pork belly ($18) accompanied by a pig's head croquette and English pea puree and tiny pearl onions. The pork was rich, succulent, and a bit salty, but easily mellowed by the pea puree. The croquette had a mushy texture that I was not fond of (it was brains, after all)  but wonderful flavor nonetheless, spicy and earthy.

Following this was a halibut filet with an olive oil- lemon emulsion and toy box tomatoes ($22) and though halibut is a bit too meaty a fish for me, the dish was fresh, slightly salty, and uncomplicated. The fish was the star of the dish. Simplicity personified.

Gordon Ramsey at The London also serves wonderful sushi. We weren't planning on getting any but still being hungry after our first three courses, and reading somewhere that it was the best sushi in LA, I opted for the most exotic sushi roll I had ever seen: a foie gras and BBQ eel roll ($18). The roll came out hot, almost baked, and didn't taste particularly of eel or foie gras. Still, together, the ingredients made for a very complex, rich, and satisfying sushi roll. Warm and hot, crunchy on the outside. Served with a slightly sweet sauce, it was one of the larger, more substantial dishes of the evening and, at $18, the most expensive sushi I've had this side of Japan!

Although the dessert menu online had some wonderful choices, I was disappointed with the actual offerings in the restaurant. Still, believing that dessert is an integral part of a good meal, and a good review, I made the sacrifice (!) and picked  dark chocolate with olive oil, tangerine, and lavender ($10). It came out much different than I expected, a slice of    fluffy chocolate mousse with nougat crust, a scoop of olive oil gelato, and sprinkling of tangerine foam. I loved the gelato, could have eaten a pint of it easily, and the crunchy nougat crust was excellent, but, I am not a huge fan of mousse or foam, so this dessert was not one of my favorites. To go with my dessert, I had coffee made in a French press ($6), served with hot milk, but the coffee was not strong enough, especially for a press, and the milk uneventful. Sorry chef.

Even though I was not full throughout the meal, I found myself definitely full by the end. The moral? Several small courses can fill you up!

Immaculate. The bathrooms, which are out of the restaurant in the hotel lobby, are spectacular.

Inexpensive small plates can add up to a very expensive meal, mediocre dessert, and weak coffee.