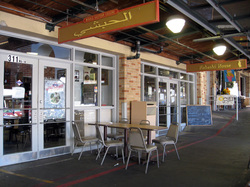 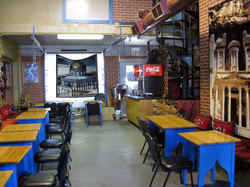 Habashi House is one of those converted loft spaces in the River Market- seemingly narrow, but with high, exposed-duct ceilings and cement floors, you know the type. Situated right next to the Habashi spice store which, I can only assume is owned by the same people, Habashi house seems large, open, and welcoming. Colorful tables flanked by long, blanket-covered banquets, local art and rugs hung on the walls, fun ethnic music playing overhead, and lively colors of blue, red, yellow and black, Habashi House is simple and unassuming, but also cozy and comfortable. On this day, it was very, very hot outside, but the air conditioning was perfect and the inside was nice and cool.

Habashi House has counter service and plastic trays. You empty your own tray into the trash as you leave.

The premise here is simple, Middle Eastern food like gyros, shwarma, hummus, and falafil, served with pita bread and lemon wedges. What's there not to like, right?

Well, as much as I enjoyed the interior of Habashi House, I was not equally impressed by the food. Probably because I have traveled to many of those Foreign countries where they serve hummus, falafil, and gyros, and this, in comparison, seemed like a cheap, Americanized version. We had 2 of the combination plates, one chicken, and one gyro meat, each served with hummus, tabbouleh, felafel, dolmas, baba ghanouj, rice and salad ($7.99).

The dolmas, grape leaves stuffed with rice, were very good. The leaves tasted fresh and the rice was soft. The hummus (a spread made with chick peas, lemon, and olive oil) was also good, though very lemony. Also, I really enjoyed the rice, which was spiced and had a nice, nutty flavor to it, and they had complimentary tea that was very good.

On the bad side, the tabouli, a cold, cracked-wheat salad, was almost all parsley and no wheat. It was also too lemony, and the falafil  (fried chick pea balls) were very dry and overcooked. The meat was the most disappointing because the gyro tasted like that very-salty processed stuff, like spam, and the chicken was also processed tasting and way too salty. Unfortunately, this is what did it for me because the fresh, hot meat is often what makes this kind of food taste so good. Also disappointing was the salad that was drowning in vinaigrette, and the pita bread, which was stale, hard, and cold (which made me wonder, why couldn't they go next door and get the fresh, soft pita bread sitting right outside the Habashi market???) After lunch, we had a piece of baklava, layed filo dough with nuts and honey, and this, too, was disappointingly stale and dry. Too bad.

So, even though the prices were good and the atmosphere comfortable, Habashi House is not a restaurant I will recommend or return to. Maybe if you don't know the difference and you've never eaten this kind of foood before, you may be intrigued, impressed, and satisfied, simply by the sheer novelty of it but, unfortunately, I wasn't.

The restaurant was immaculate. Bathrooms are located outside at the end of the River Market.

The food is not very impressive. The meat is salty and processed and the pita bread is cold and stale.