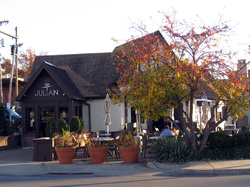 Julian has the right idea: start with an award-winning chef, lease an adorable building in a quaint neighborhood, get fantastic graphic artists to design your logos and other restaurant accoutrements and, voila, you have a hit restaurant. Right? But, somehow, even with all this, Julian fails to hit its mark. The food can be good, yes, at some times very, very good, but it's not consistent or even, and it is sadly not enough to carry the restaurant's horrible décor or very dull atmosphere.

At minimum, they could clean up the shelves, hang decent art on the walls, and play music in the dining room; those seem like such trivial things after all the other efforts Julian employs and, yet, they are unequivocally and perplexingly ignored. The result is a meal that leaves the diner feeling uninspired and flat. Remember, a good night out is judged not solely by the food on the plate, but by the total experience.

For a more pleasant overall experience, we suspect the patio may be the best option.

Try the braised Spare Ribs with gnocchi and Ginger doughnut 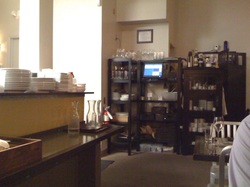 Tucked inside an adorable English Tudor-style house, the space inside Julian is intimate and cozy (to say the least) and divided into two small dining areas. The first is flanked by a small host station and bar and is fit with several small dining tables. The second, which is reached by navigating a narrow corridor between the kitchen and the bathrooms, is slightly larger, with more tables, and a petite semi-open kitchen. The tables themselves are simple, yet modern-looking, with stylish bistro chairs painted silver to resemble metal, colorful woven placemats, and large wine glasses. The far wall is painted a bright green-blue for a shock of color.

But, despite its half-focused efforts to make Julian look cool, or sleek, the overall effect is unfortunately disappointing. The rooms themselves are basically unadorned boxes with little character or interest, and the dull grey carpeting and wrinkled posters on the walls do nothing to help.

Even more disheartening, the open waiters' station displays a messy collection of glasses, bread baskets, and dishes, which one is forced to stare at throughout the meal if facing that direction, and the open kitchen, too, is unsightly, with more stacks of disorganized dishes, ugly plastic tubs of spices, scruffy tiles, and loud banging pots. The only music that can be heard is that coming from inside the kitchen's prep station, meaning the rooms have no atmosphere at all.

If you are going to have a small room with minimal décor or an open kitchen for all to see, it is imperative that they be immaculate or at least interesting to look at, or both, but in this instance it seems as if nobody gave any of it second thought and that is, in effect, tragic. It's almost as it Julian could not decide whether to go sleek and modern, or funky and cool, so they just gave up, and the result is total chaos.

We should mention that, outside, Julian has a lovely, large patio with immaculate tables and comfortable seating. It looked closed on the night we went, but perhaps that is the best option for the aesthetically-minded.

Service is casual and friendly, almost bordering on the hovering, but probably because we were one of only two tables. Still, everyone there seemed genuinely invested in our having a good meal, and that was noticed and appreciated. 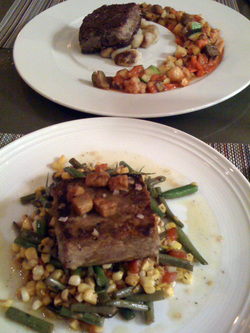 Décor aside, the star at Julian is supposed to be the food, so it was with great enthusiasm that we perused the menu. The selections are whimsical and unique, with a strong emphasis on what is local and fresh, a trend that is finally catching on in Kansas City. Think things like Yesterday's Soup, and House made Pretzels make it fun to choose what you will have. We laughed when the server unknowingly referred to it as 'Today's yesterday's soup".

To begin, an Heirloom Tomato salad with house made burrata and balsamic reduction ($9) was fine, but a little too cold to bring out the full flavor of the tomatoes. The burrata was good, but not exceptional.  We asked for bread to go with the salad. Unfortunately, it appeared 20 minutes into the meal, long after the salad was gone. When it came, thought, it was delicious.

For entrees, Braised short ribs with potato gnocchi and ratatouille ($19) looked strikingly similar in presentation to the Crispy Pork Shoulder with succoutash and bacon vinaigrette ($17) but both had distinctively unique flavors. The ribs were succulently moist and fatty, falling apart at the mere touch of the fork and melting in the mouth with every bite. The ratatouille was simple, fresh, and delicious, and the gnocchi a bit more squishy than others, but still very good. I would have liked to see more of them. The pork, on the other hand, was slightly dry and salty, and a little disappointing, but the direct-from-the-farm succoutash, with crisp green beans and juicy sweet corn was outstanding. It struck us as odd that both meats were braised, shredded, and then reshaped into squares on the plate. I'm not sure who decided that a molded square shape is an appealing option for meat but I, for one, found it a little disconcerting, maybe because it reminds me of that other famous meat-as-square, Spam.

For dessert, we settled on a Chocolate Puddin' with a Ginger Doughnut ($4) though it was mysteriously absent from the dessert tray (but on the menu). The pudding itself was rich and creamy, topped with a generous sprinkling of crunchy sea salt. And, though I love the combination of sweet and salty, the chocolate here was not strong or sweet enough to carry the tang of the salt, so the result was a pudding that was savory, but not really sweet. The ginger doughnut, however, was fantastic: sugary, doughy, and cake-y, with the slight bite of ginger. Delicious!

Julian has a small specialty cocktail list but none seemed exciting or inventive enough for the $10 price. They also have a nice wine selection by the bottle and the glass.

Clean but a general atmosphere inside that is messy and unkempt.