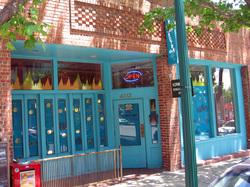 All in all, the lunch buffet at Korma Sutra was a very positive experience, despite the minor service infractions, for the food alone, if nothing else. And, really, isn't that the most important thing? For the variety, quality, and the great extras that come along with it, the $8.99 price is more than fair and there is no doubt we will return again and again. And, we are not the only ones, while we were there a man came in for to go food and told the manager it was his favorite restaurant in all of KC. So, there you go! The best buffet in town? Hmmmmm, Could be...

Korma Sutra, from the outside, is not very impressive. In fact, I would probably walk right by if I didn't know what great food was inside. Tucked away on a side street in Westport, the windows are covered, and the sign obscure, making it almost invisible. However, once you walk inside the pleasant sunniness hits you and you forget all about what is on the outside.

The restaurant itself  is not large but the very high ceilings make it seem big. The colors are fresh and fun: orange, yellow and blue and the tables are spaced out well so you don't feel like you are eating on top of other diners. The decor is Indian, but not overdone or theme-park-ish. There are many booths running along both walls. On this day, the music was Indian pop which was played at a perfect volume and set a fun and festive atmosphere without being obtrusive.

Overall, the service was fine, dishes were cleared regularly and drinks were filled in a timely fashion. However, I will admit that this is the one area where Korma Sutra could use some improvement. When we walked in we were not greeted by a friendly hello, and I could have done without the attitude as we requested a booth instead of the small table towards the middle of the room- was that an eye roll? especially since the restaurant was not crowded. Also, our server hardly spoke or acknowledged us at all during the entire meal, causing us to wonder if she even spoke English or, in fact, spoke at all.  Between trips to the buffet our dirty silverware was handled and laid back down on the table without a napkin or anything under it, something that made both of us cringe.

We were there for the lunch buffet, which we heard was rated as the best buffet in town.

We took a seat at one of the booths. Hot garlic naan bread (like an Indian pita bread) was brought to the table, as well as a mango yogurt drink called lassiz. Both were brought and refilled at no extra charge. The drink was delicious, sweet and smooth, but  the naan was a little undercooked and doughy for me. Still, I always prefer naan bread to rice, so it was a nice treat. Perhaps some people would prefer plain naan over  garlic.

The buffet is laid out against the far right corner as you come in. The selection is varied and well-stocked. We noticed several vegetarian options such as a lentil dahl, as well as several meat dishes, one of which included curried goat. There is also a nice selection of condiments such as mango chutney, yogurt-based sauces, mint relish, and lime pickle. The meat dishes were full of meat, something unusual for a buffet, and not too saucy. Overall, the spiciness of the food was perfect, some dishes were hot and others mild, which is good to suite everyone's taste. One or two dishes may have been a bit too salty.

Also on the buffet was a small selection of desserts, in this case a carrot pudding-like dish called gajar Halva, which I love because it is nicely textured and not too sweet, and a pan of warm doughnut-like balls soaked in a honey syrup called gulag jaman, also good. There were also fresh strawberries but I was too full to try those. After the meal, delicious chai tea is served, again, at no extra charge.

The women's bathrooms was clean and well-kempt. The men's room needed attention. There were no towels in the men's room and when my companion mentioned this he was not acknowledged nor were the towels replaced. He wondered if they understood English. He dried his hands on a napkin at the buffet table.

The extras, like warm bread, chai tea, and mango smoothie make this buffet special. The food is great and the variety excellent.

The service is a little lacking.