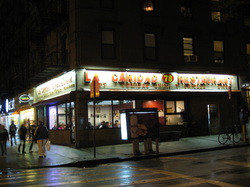 La Caridad is OK if you know what to order and what you are there for. The prices are certainly reasonable and the portions huge, though it is not exactly a relaxing, fulfilling dining experience. Just a word of caution, La Caridad takes cash only and is not always open during their posted hours. Try the chicken cracklings with lemon, roasted pork, rice and beans, and beer. 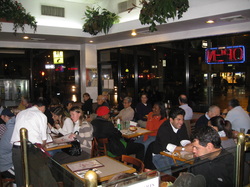 This no-frills eatery has been in the same location for 35 years and has obviously not changed a bit. With no distinct décor to speak of, bland off-white walls and nondescript tables and chairs, accented by a few random overhead plants and bright overhead lighting, make up the lackluster atmosphere. Large windows allow for good outside people-watching, and crowded tables with loud diners create somewhat of a buzz.  Oh, and don't forget the loud din of banging, clanging dishes as they are thrown in bus tubs.

Service here is friendly, though a bit rough around the edges. Our waiter spoke in a mumbled, broken English that was almost amusing. He was hurried but not altogether inefficient. 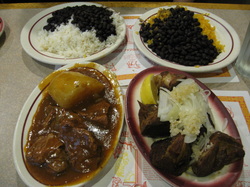 La Caridad has a huge menu with both Chinese and Cuban selections that have such sparse wording you are left to question what the is difference between 'Roast pork Cuban Style', or 'Fried pork Cuban Style'? And, since we could not understand our waiter, we had to simply close our eyes and choose blindly. We had read to stick to the Cuban side of the menu, since NYC has so many great Chinese restaurants, so that is what we did.

First, we ordered an appetizer of chicken cracklings ($6.90), which was basically a huge plate of very crispy fried chicken with lots of crispy skin and a tiny bit of meat. It came with fresh lemon which made it taste like fried calamari, without the calamari. And although it was very simple and kind of dry, the skin was good and hot and tasted freshly-fried. We also had a mediocre pork tamale ($2.55) that was served lukewarm and tasted bland.

For entrees we chose Cuban style pork ($9) which was large chunks of fried pork on the bone, topped with sliced raw onions and lots of minced garlic in vinaigrette. Again, the meat itself was a little dry, and I cannot eat raw onions in any form, but the minced garlic made the meat tasty and interesting and, honestly, I wish there had been more of it, the garlic, that is. Along with our pork, we had a beef stew that was large chunks of beef and a potato in a drippy beef gravy ($9). This is not my style of eating, so it wasn't my favorite dish, but James loved it so, go figure! Both entrees come with a huge portion of rice and beans. You can choose white or yellow rice, we chose yellow, and the beans were black and seemingly cooked with care. They both were delicious, but we ended up taking the bulk of the rice and beans home. This is the kind of food that goes great with beer, and the beer prices are very reasonable. We were too stuffed for dessert.

Not entirely clean. The bathrooms were very messy and had a horrible smell. I didn't want to see the kitchen