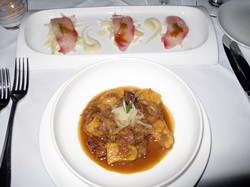 One may argue that L'Ecole is not the most beautiful restaurant in NYC, nor does it have the best service, or even the best food. But at $42 for a full 5-course dinner it certainly is a bargain, and that is something you can't argue with. Besides that, you may be giving the next David Bouley a chance to perfect his craft, and that is a good cause that we can all get behind. Come here if you really need a fancy night out, but can't afford it. 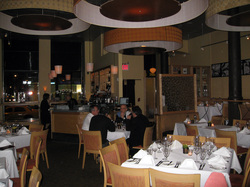 Sitting on a desirable corner on the edge of SoHo, L'Ecole beckons with large picture windows and cozy candlelit tables. Once inside, however, the décor is staid and sedate, with nothing particularly exciting or unusual about it. Nondescript blond-wood tables and are set against beige or rust-colored walls, carpeting covers the floors, and pictures of chefs-in-action adorn the walls.  Tables are set with traditional white linen and lighting is low. French music plays softly in the background. But, in all its non-eventfulness, one must remember that L'Ecole is a school, and the décor is really nothing more than a functional setting for the students to learn and practice their burgeoning art. For that purpose, it is more than adequate.

Although I assume that the front of the house staff are not students, the service was altogether choppy and inconsistent. First, we were not allowed to sit at a window table, even though 2 of them were available and the restaurant was closing soon. Instead, we were seated off to the side at a small, cramped table that we didn't like, with the vacant dining room and the two unseated window tables mocking us from a distance. In all my life I will never understand it.

Besides the table, the hostess who seated us was distracted by someone else, and ended up not actually taking us to a table, but walking instead to the back of the restaurant. We almost followed her into the office. She apologized. After that, our server was pleasant, though not exactly bursting with personality. He offered us only a choice of mineral waters (pet peeve #1) and appetizers arrived before the cocktails. Butter was forgotten with the bread, and no one came to check on us while we were eating. Of course, none of these are unforgivable errors in-and-of themselves, but neither are they examples of exemplary service. Being a school, I would like to believe that L'Ecole pays attention to the entire guest experience, and not just the cooking.

Of the whole serving team, the busboys and runners seemed to be the most professional and well-informed, and were all polite, personable, and charming. 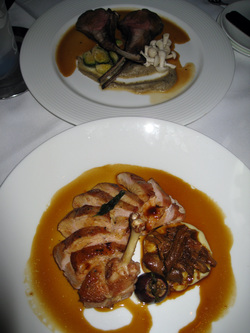 Being part of the French Culinary Institute, L'Ecole focuses on, as one would assume, traditional French Cuisine. The menu is a generous 5-course prefix that consists of an appetizer, fish, meat, salad, and dessert.

To begin, the amuse bouche of cucumber gazpacho was fresh and light, though an odd choice for January.

For appetizers, raw hamachi with apple crème fraiche and fennel was clean and bright, and light-as-air gnocchi with braised rabbit ragu was a hearty success. For the fish course, brioche-crusted scallops came with butternut squash hollandaise that was too too heavy for the delicate mollusk, and the seafood stew was so salty it was almost inedible.

Entrees were more successful, with sauteed pheasant that was succulent and tender, and outstanding creamy dauphine potatoes, and lamb, though too rare to be medium as requested, with an exquisitely-rich sunchoke and cheddar puree. Neither meat was served hot.

For the salad course, an interesting and mildly sweet goat cheese sorbet with frisee and drizzled balsamic reduction, which was fun to eat with a knife and fork, but was a challenge to keep on the plate and not in one's lap.

For dessert, chocolate porcini cake with chocolate-olive oil sorbet offered both sweet and earthy flavors that danced on the palate and kept the mind guessing. And a baked apple was cleverly used as a vessel for crème brulee, and was rolled in chopped nuts and drizzled with a sweet red sauce, like a sophisticated candy apple. Coffee was excellent.

To drink, we tried an Allspice Fizz ($12), comprised of bourbon, allspice rum, casis, and frothed egg whites (a new trend in NYC cocktails) which was oddly herbal but not at all sweet. I added a little simple syrup, but still didn't care for it.

L'Ecole is clean, though it may be a little worse-for-wear. The bathrooms were garishly-lit and messy.

Some very good dishes, great price for a 5-course meal.