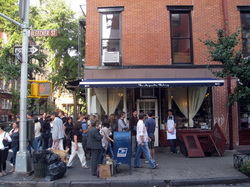 There is a lot of hype around the Magnolia Bakery and I'm not sure why. Perhaps it is the very quaint and adorable shabby chic setting, perhaps it is the idea of old-fashioned baked goods that look like your Grandmother made them, perhaps it is the comfort of a place that doesn't try to be too fancy or elite, perhaps it is the fact that Magnolia started the whole cupcake phenomenon, perhaps its a little of all those things. But still, honestly, the cupcakes were not that good!  I've had better. I've made better! That's not to say I will NEVER try Magnolia again. A banana pudding sounds promising, or maybe when it's not that crowded there will be a different and more exciting cupcake option to try. But for now I have to say that unless you like very sweet frosting and not so much the cake, then you can skip Magnolia, and all the hype, and not feel guilty. 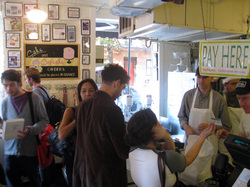 A great deal of Magnolia Bakery's huge success lies in it's charming and adorable old-fashioned atmosphere. Sitting peacefully on a beautiful West Village corner, the bakery looks European on the outside, but quintessentially American on the inside, small and cute in a shabby-chic sort of way with pale green walls, a white tin roof ceiling, and black and white checkerboard floors. Cupcakes are on display by the windows where one can grab and stuff a box on their own. Other treats are displayed in refrigerated cases or in cake stands on the counter. The one thing Magnolia does right is that it looks charming and comforting without trying too hard. The cupcakes and cakes are simple, homemade, gloopy, gooey, messy. Nothing looks perfect or too pretty to eat. They look like your grandmother made them and that, my friends, is the draw. One note of caution, Magnolia is VERY popular and, especially on weekends. Expect a long line out the door. It moves quickly, but still...

Service at Magnolia was incredibly efficient. Though basically counter service, at busy time you can still find several people on the floor asking if you need assistance. We were there on a very crowded Sunday afternoon, but were in and out in a flash. 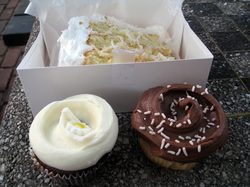 When you see all the treats on display, all looking beautifully delicious, all screaming 'Eat me! Eat me!' it's difficult to make a choice, very difficult! Does one go with the famous cupcakes? Or the incredible-looking cake? Or maybe a cheesecake? Or blueberry crumble? Banana pudding? Ahhhhh, you could go crazy trying to decide. This being our first time at Magnolia, I thought it important to try what they are famous for and, so, chose 2 simple cupcakes, one vanilla with chocolate buttercream frosting, one chocolate with vanilla buttercream frosting. Then, just for fun, a huge piece of coconut layer cake that looked so moist and delicious, the server could hardly get his knife through it. We brought our treasure over to a nearby park where we sat on a bench under nice shady trees. All around us were others with the same idea, each with a small white Magnolia box before them. In our box, 2 adorable cupcakes, small, quaint, homemade looking, with haphazard swirls of fluffy frosting on them. The coconut cake falling apart, bursting out of it box. Mmmm.

OK, so is the hype worth it? In a word, I have to say, no. I hate to admit it but, honestly, the cupcakes were not that good. The frosting was so sweet I could hardly eat any of it. It was so sugary it hurt my teeth. Underneath, the cake was dense and flat, almost stale tasting. Overall, the frosting was so heavy there was no balance between the cake and the frosting. There was no cohesive whole. It was as if the cupcake were merely a vessel for this sickeningly-sweet gloppy frosting. I was hugely disappointed. The coconut cake was only slightly better. The frosting was nice, with big, chewy globs of coconut, but the cake was, again, flat, dense, and flavorless. Let me put it this way, I had $11 worth of cake in front of me and a free license to eat as much of it as I wanted, and I only finished about a fourth of it. I threw the rest away. Now that's saying something. Sorry, Magnolia, but you were not my favorite, by far!

After great anticipation, standing in the long line, and making our way into the crowded store, I can't believe I'm writing this, but the cake and cupcakes were not that good! The frosting was way too sweet and the cake heavy and flavorless.