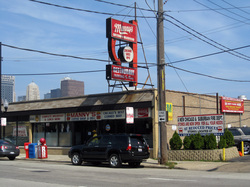 They say that Manny's is the closest thing in Chicago to a NY-style deli, and I believe that. Overall the food here was very good, almost excellent, though I can't say it's the best deli I've ever had. Then again, I have tried the best in NYC, LA, and Florida, so it's tough competition. I'd say Manny's biggest fault is due to the cafeteria-style, which can sometimes leave the food cold and lifeless. On the other hand, this is what makes Manny's unique. Still, I will know better next time which things to order and which to avoid. Either way, I have to say, that corned beef was stellar! And, it makes for an excellent photo! Try the Corned Beef Reuben, ask them to make it fresh. 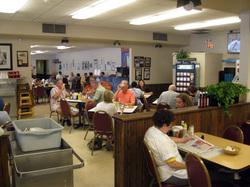 Manny's looks exactly as a great deli should, nothing fancy, all appearing as if it hasn't changed since opening which, in this case, is 1942. 3 huge dining rooms are loaded with an array of formica tables, red vinyl chairs, and linoleum floors, all set off by very-flattering(!) florescent lighting. The only thing that makes Manny's different from other delis, though, is the long cafeteria-style counter where the food is laid out in front of you and you slide your plastic tray along the rails, picking and choosing as you go along. It's all kind of like grade school, but with much bigger portions!

As with most restaurants that are institutions, the walls are lined with pictures of famous people enjoying the restaurant's offerings. In this case, we saw a few pictures of Obama, since he is from Chicago. 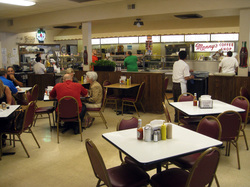 Manny's is mostly counter service, which was old-style friendly and not plastic or fake. This is a compliment. Busboys slammed dishes into bus tubs a little too loudly and everyone was speaking Spanish. I mean no offense here but, frankly, I miss the time when all deli servers were older women with beehive hairdos who called you 'Honey' and smacked gum. That's more of a style statement than anything else. Ah, the good old days! 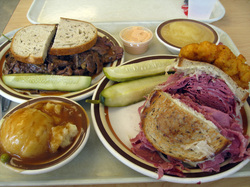 As anyone familiar with an authentic Deli knows, it's all about the food! In fact, the Manny's website states, "At Manny's you don't diet. You don't snack. You don't nosh. You come to this landmark lunchroom to pile your tray high and eat like there's no tomorrow."  And, so, that is what we did. With so many great choices, it was difficult to choose from the many items on display and all within our reach. Our first choice was a roasted tongue with mushrooms sandwich on rye ($11.95), served with mashed potatoes and gravy. The tongue tasted more like it was braised than roasted, very tender and soft, and smothered in rich, flavorful mushroom gravy. The taste was excellent, but the sandwich was very, very rich. The mashed potatoes were nice and chunky, obviously real potatoes, and the gravy good. We also had a Rueben sandwich, which is corned beef piled high (if it's done correctly) on toasted rye bread ($11.95), with swiss cheese, sauerkraut, and served with a side of thousand island dressing. With this, we opted for a side of potato pancake, which was $1 extra. The Rueben sandwich is a staple at delis everywhere, and one of my all-time favorites. Standing at least 4 inches tall, the corned beef here was amazing, tender, flavorful, melt-in-your-mouth good, but I was disappointed that the bread was soggy. This was because it was pulled, already made, off of the cafeteria line instead of being made fresh to order. If I had to do it again, I would ask them to make me a fresh one. Too bad because, otherwise, it would have been a perfect sandwich. Along with the sandwich was another deli staple, the pickle, fresh, crunchy, salty, and yummy! Our potato pancake was not one of my favorites. Whereas most potato pancakes are made in a pan or on a griddle, this was deep-fried, so it was extra greasy and heavy. It was also a little cold from sitting on the cafeteria line. Still, I have to admit, none of this stopped me from eating the whole pancake the flavor was pretty good. Most people choose sour cream or applesauce for their latke, I like mine with both! Those are available as sides at the end of the cafeteria line. We were too stuffed for anything else. I could only eat half of the Rueben. This is also the sign of a great deli- huge portions!

Everything seemed very clean, including the restrooms which were very large and well-kept.

A great and authentic old-style deli that has kept it's style and charm throughout the years. The food is very good and the portions huge.

Watch out for pre-made things that may have sat on the line a little too long, such as greasy potato pancakes and soggy Ruebens.