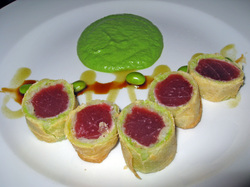 In its cozy and classically-designed Mercer kitchen, Jean Georges offers excellent food at reasonable prices. The décor is strong, modern, and simple though, personally, we prefer to sit upstairs in the smaller, more audacious cafe. And though not everything we tried was life-changing, some of the food was the most outstanding we've ever encountered, period. Try the Tuna Spring Roll, Valrhona Chocolate Cake, and Black truffle & Fontina Pizza.

Downstairs, the main dining room is dark and cloistral, with no windows to give it life. Small tables are smushed together against a backdrop of leather banquettes and exposed brick walls, and an open kitchen is bordered by high-standing communal tables and hanging pendant lights. At night, we found this dining room too crowded and noisy, and were very happy to sit upstairs in the quiet and unfussy cafe.

Service was polite and professional, though not as attentive as it could have been. The busboy put our dirty, used silverware back on the table between courses. Where are we, Denny's?

As we were leaving, we notice the table next to us had been served bread, something that had not been served to us. They explained it was offered to them after they had ordered, but they declined, and it was served to them anyway. So what happened to our bread?

To begin, we ordered a starter simply entitled 'Tuna Spring Roll with Soybean Puree'($15), but what appeared at the table was one of the most exquisite things we've ever eaten. Nice chunks of pink raw tuna were wrapped inside slices of pickled ginger, wrapped in filo dough, and deep fried. The result was a roll that was tender, flakey, and hot on the outside and beautifully fresh raw and delicate on the inside. The ginger gave it a wonderful bite and crunch, and the edamame sauce had a slight tang of vinegar and spice. The dish was absolutely spectacular!

To follow, the entrees were not as outstanding. Sauteed Skate fish ($19) had a nice flavor of sesame and vinegar, delicate sushi rice, and perfectly-cooked asparagus, but the fish itself was nothing remarkable and the portion was very small. Similarly, the ordinary slowly-baked salmon ($25) and shredded Brussels sprouts were saved only by the excellent and creamy truffle mashed potatoes.

For dessert, a warm and oozy Valrhona chocolate cake with vanilla bean ice cream was one of the best we've experienced, being only slightly sweet and perfectly rich, and the strong coffee was superb.

To drink, a holiday Egg Nog Martini was sweet, creamy, and strong. Luckily for our waistlines, we only ordered one.

The table next to us ordered a black truffle and fontina pizza that smelled heavenly and looked delicious!