Morimoto strikes the perfect balance between exquisite formal dining and comfortable hospitality. The décor is simple yet  extravagant, and the food familiar, yet indulgent. Dishes are executed with perfect efficiency and, although the ingredients in and of themselves seem uncomplicated, the result is food that is complex, layered, and downright divine. Dining at Morimoto is a certainly a culinary privilege, and those who are lucky enough to partake will  no doubt have a meal to remember. Try the Shochu on the rocks, Sushi, Duck Duck Duck, and Green tea ice cream. 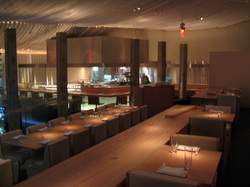 Stepping beyond the red drape that is Morimoto's obscure and humble entrance, one is immediately taken aback by the vastness of this sparkling Japanese culinary Wonderland. Awash in blond wood, beige, and glass, seating is well spaced and covers two levels. The furniture is sparse and modern. In the middle, a 2-story wall made of plastic water bottles that looks like a glass sculpture and is better-lit than the Mona Lisa. The effect is stunning. In the back, and open kitchen and sushi bar, where you are not sure if you are watching the chefs, or they are watching you. Most surprising? The loud, pulsing music that makes Morimoto's seem more like a club than a restaurant. It gives the space life and energy, though I wouldn't expect that kind of music from the stoic, serious character we see on Iron Chef. A more casual bar and bar seating area is downstairs.

Service was attentive and professional from the manager to the food runners. All employees seemed well-trained and eager to serve. No one gave us a hint of restlessness even though we were there close to closing. Female servers wear chic black dresses,  a nice change from the usual shirt and black pants combo. 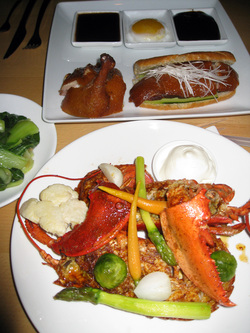 Presented with a dazzling array of fine Japanese selections it was difficult to decide on which dishes would highlight the expertise of a star chef like Morimoto. To begin, the spicy tuna roll ($7.5) was an enticing combination of  fresh raw tuna and toasted black sesame, with a hidden bite of spicy sauce which seemed to unravel with each bite.

For entrees, the lobster with garahm masala  ($37) was both simple and complex, as the sweetness of the perfectly-cooked meat meshed with the earthy spiciness of the seasoning. The star, however, was the Duck, Duck, Duck ($32), a confit duck leg accompanied by a fois gras duck croissant, roasted duck, a sunny-side-up duck egg, and a side of red miso and hoisin sauces that when pieced together into one, luxurious duck meat, duck egg, and croissant sandwich with hoisin sauce could almost make you cry. The croissant was buttery, flakey, and soft, the duck meat immaculately tender, the egg oozed out and dribbled down your hand as you bit into it, and the hoisin sauce was thick, sweet, and tangy. Bravo, Morimoto, Bravo! Or should I say, Omedetou gozaimasu! (Congratulations on your good work, in Japanese)

The layered green tea and sesame cake with white chocolate layers ($12) was unique but not as successful as the entrees. If you are a green tea fan, try the green tea ice cream instead.

Also worth noting, the selection of Japanese liquor called Shochu, which is similar to vodka but with less alcohol. Sudahi Shochu ($12) was slightly citrusy and easy to drink, but had no real effects of alcohol. (Darn.)Shochu is traditionally served on the rocks.

Absolutely sparkling. The marble bathrooms, with f'loating' leaves in the stalls are fantastic.

Not a place to go if you don't like loud music, Dessert was not as strong as the entrees.