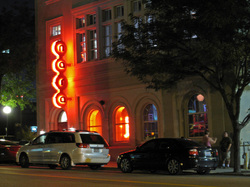 Nara is one of those restaurants that 'gets it'- it is an entertaining, inventive, and unusual experience that makes going out an event and not just a meal. The menu is exciting and creative and the food and service excellent. And, as a bonus, it is reasonably-priced!! All-in-all, it makes for a fun and satisfying night out. If you're going on a weekend night bring your disco shoes, or earplugs. 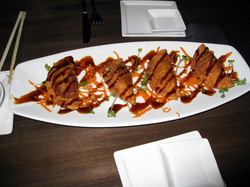 We went to Nara on a Friday night, around 10pm which, I know, is very late for most KC diners and, so, when I refer to the atmosphere please understand that it may be different, totally different, on a regular weeknight at, say, 7pm, when most people are likely to dine. That remains to be seen…

The key word for Nara is 'hip', and it is, hip, hip and very hip. The first thing you notice as you get out of your car is the music, and eclectic mix of jazz, funk, disco, whatever, played loudly over the outside speakers, and the large neon-orange sign that hangs over the doorway, both confidently announcing the restaurant's presence in a neighborhood that recently could only count Daddy's, Bulldog, and Bazooka, the strip club, as it's residents.

When you walk into the building you first enter a foyer, and are greeted by a hostess stand that is situated right outside the restaurant's entrance, giving you the feeling that you are about to enter something special. Once inside, you are immediately hit by the dark atmosphere, the pumping music, and the cool, neon-lit bar which, on this night, was filled with young, well-dressed, and social, happy patrons.

The layout is interesting; it's a long, narrow space with wood floors, exposed brick, and high wood beam ceilings, contrasted by immaculate, black, highly-polished tables and modern low lighting. Tall windows on one side look out onto the downtown skyline. The dining tables are set up in three long rows running lengthwise down the room, with a nice mix of cozy booths, banquettes, and tables, and are flanked by the bar on one side, and a sushi counter on the other. It's almost as if Nara is 3 restaurants in one, though it is still small enough to function as a cohesive whole.

As I mentioned, this was a Friday night, late, and so the atmosphere was a little more like a club than a restaurant. The room was very dimly lit, so dim in fact, I had a difficult time reading my menu. Now, I am one who always loves a romantic, dark atmosphere, my house is frequently referred to as 'a tomb', but this was a little too dark even for me! There were table lamps that emitted a soft, hazy glow, but they were essentially useless. Also, although I liked the energy of the music, as the night progressed, it got louder and louder and I found myself frequently asking 'what!?' whenever anyone spoke to me. It's one thing to be surrounded by lively music; it's another to feel like you are sitting in the middle of a disco trying to eat your meal. It almost discouraged me from ordering dessert, but not quite :-) 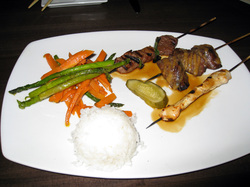 The service was exactly as it should be for a place like this. The waiters and waitresses, dressed minimally in black, all looked young and energetic and were bustling around looking busy. Our waiter was at once friendly, informative, attentive, and casual- a perfect mix for this type of restaurant. He was a little lax picking up our credit card but, hey, that's the worst of it. He suggested things without being pushy and the food came out promptly. 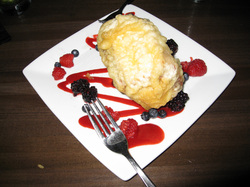 The menu was what brought me to Nara because it looked so unusual. It's large and requires a good amount of studying before you order. Good luck if the lights are low…

First, there are the drinks. Nara has an extensive drink menu featuring wines, beers, sakes by the glass and the bottle, and innovative, but expensive ($9) cocktails, everything from a plum wine mojito to a pomegranate martini. We tried a pear-infused and a lemon-grass-coconut infused sake, both $6, which were good, especially the coconut one, but at only 1.5 ounces they were more like shots than drinks. We polished those off quickly, too quickly. I then had a sake mojito which tasted a little sour to me at first, but grew on me as I kept drinking. It was lemony or, I guess lime-y, and refreshing. And, it did it's job, by the end of the meal I hardly minded the blaring music and remember breezily stating how happy I was before I conked-out on the couch at home. I wasn't drunk, exactly, just mellow. Ah, the power of sake :-)

There were 4 components to the menu: appetizers, entrees, sushi, and robata (Robata is a kind of traditional Japanese grilling that has its roots in the fishing villages of rural Japan, think grilled meats on skewers.) and there were so many interesting choices that we decided to get a variety of things to share and not just the regular appetizers and 2 entrees. The first thing we ordered was the seaweed salad, a favorite of mine even when purchased at the grocery store, and this was great. At $4, it came out on a little Japanese dish and it was fresh and delicious. I think my boyfriend called it 'extraordinary' which is quite an accolade for a small dish of cold seaweed.
Our second dish was the shrimp and pork gyoza ($6), a pan-seared dumpling with an orange -soy glaze. For me, this was a little over-fried and dry, I could have sworn it was deep fried and not pan-seared, most gyoza I've had were doughy, and this was crisp, but it still had good flavor and the sauce was nice and not overpowering. It was plated beautifully.

Our third dish was the robata combination ($10), which consisted of one skewer each of beef, chicken, and sausage, accompanied by white rice and sautéed carrots and green beans. The beef was delicious, very tender and tasty, the chicken a little dry, and the sausage magnificent, juicy, spicy, succulent like no other sausage I've ever had. In fact, I couldn't even identify it as sausage until I asked what it was. It was cooked in some kind of spicy-sweet mustard sauce. Let's put it this way, next time I am getting a plate of just the sausage!! The white rice was sticky and good, and the vegetables cooked perfectly and seasoned beautifully, it was the first time I ever liked a cooked carrot, now that's saying something!

Our fourth dish was sushi, an eel roll ($8), and although it seemed to have some weird green in it, (was that a collard green?) it grew on me. It tasted very fresh and was a decent size, though I would've liked to taste a little more eel and a little less sweet sauce.
Funny thing, I swear I saw a Mexican guy working behind the sushi counter. Ha-ha, that was a first! I only mention it because sushi is one of those things that requires an authentic, extremely well-trained, and usually Japanese professional, right? But, whatever, if it tastes good, it tastes good. Maybe it was the sake that was making me see things…

Next was a beef negimaki ($18), thin slices of beef rolled around green onions, grilled, and drizzled with a teriyaki sauce. This was also very good, although maybe a little salty and saucy for me, but still tender and delicious, and nice and hot. It was also accompanied by the white rice and vegetables.

Last but not least, we had tempura-fried ice cream ($9), delicate white cake wrapped around vanilla ice cream, dipped in tempura batter, and deep fried. What else can I say?! Cake, ice cream, and fried batter, it can't be bad! It reminded me of those fried funnel cakes you get at carnivals, with a slight Japanese flavor. It was very good, though a little heavy. I only had a few bites but my boyfriend, the one who says he doesn't like sweets, devoured it!

The restaurant was immaculate although, in the dark light, who could tell!? The restrooms are on a lower level and were both roomy and clean. The large, modern metal sink is shared by both the men's and women's room. You have to see it to understand, but it was very cool.

Creative food, attentive service, and a festive atmosphere at a comparatively reasonable price.

Very dark and very loud music, drinks are expensive. Investigators found Nara was secretly substituting less expensive ingredients on their menu. For example, they were found to have served Tilapia when the customer ordered Red Snapper.