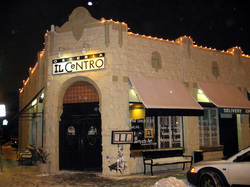 Although there are some things I did not like about Il Centro it's lasting impression was very positive. The fact that on a snowy Tuesday night this place was packed with lines out the door waiting for tables speaks volumes to the popularity and success of this small neighborhood bistro. The food was not always consistent but some of the dishes were outstanding. And, the prices were more than reasonable. The atmosphere was both romantic and electrifying. No doubt, we will return again. Try the veal meatballs and the focaccia dipped in olive oil.. 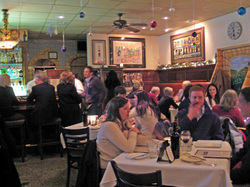 Apparently, we are the only people in all of KC that had never heard of Il Centro! On a snowing Tuesday night it was packed with a group at the bar and a line out the door waiting to be seated. Since I have never seen a line at any KC restaurant, I was duly impressed.The restaurant itself is a small square room with the bar and bar seating on the left, and      dining tables and banquette seating on the right. After a '20 minute' wait that was really a half hour, we were seated at a 'high-boy', or  tall cocktail table, that was set for dining which was fine with us, except that we were surrounded by the bar crowd. But, to be fair, the restaurant was so busy every table seemed crowded. The room was dark, lit by votives, and the tables were dressed with both cloths and paper, giving it a casual yet elegant appearance.  Silverware is rolled in linen napkins. Over the bar was a large flat-screened TV with a basketball game playing that I thought ruined the cozy atmosphere (why does every restaurant have a TV these days??) And, there was music in the background but I couldn't hear it. Looking around at the decor I noticed quaint old touches that brought back an earlier era: shuttered windows, old leather banquettes with dark wood detailing, ornate old coat hooks, and a grey peppered linoleum floor which conjured up images of a 40's cafe ala Humphry Bogart. Unfortunately, these things were marred by a few tacky murals, cheap and dated artwork on the walls, and ugly acoustic ceiling tiles. Too bad!

The service here is casual and friendly. Our server was very busy but he dutifully attended to our requests, the candle went out, we needed olive oil, we sent our dessert back, you know, the things that drive servers crazy, but he was patient and friendly to the end. 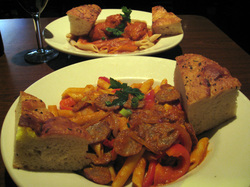 Il Centro serves a very basic, typical Italian fare. The menu is full of things like lasagna, veal piccata, calamari, eggplant Parmesan, and the like, and the prices are very reasonable. To start, we had a caprese salad ($3.00), mozzarella with tomatoes, basil, and balsamic vinegar, which was very good. The mozzarella tasted house-made, very fresh, and the vinegar had a lovely tang. I could've used a little more basil, I like the large leaves and this was shredded, and the tomato was not very flavorful, but it is Winter in the Midwest :) To accompany our salad we had an oder of focaccia (Italian bread made with yeast and olive oil) which was spongier and fluffier than I am accustomed to but when dipped in olive oil was sublime!For entrees we chose a special, chicken piccata ($17.95), which is chicken pounded flat and thin, served with a lemon, white wine, and caper sauce. Piccata is one of my all-time favorite things when I am in Italy and this was a little disappointing, not enough lemon or garlic for my taste, but the chicken was cooked perfectly and the rosemary mashed potatoes that came with it were good. We also tried the veal meatballs, huge house-made meatballs that come with spaghetti and marinara sauce. And, although they were not as warm as we would like, these meatballs were outstanding! I could not stop eating them! The sauce, meat, spices, texture, all perfectly blended to make one of the tastiest dishes I've ever eaten. It just goes to show you, you never know what you will like.With our meatballs, we substituted the spaghetti for whole wheat penne  for an extra $2. And, although the pasta was good, we had to make sure it was really whole wheat because it was whiter-than-white. Our server assured us it was, though I still have my doubts. Maybe 10% whole wheat? For dessert we passed on the restaurant's most popular tiramisu and decided instead to have the chocolate creme brulee. Unfortunately, the crust was soggy and not bruleed at all, and the custard itself was grainy and sugary. My guess is that they had bruleed this earlier and let it sit around. After a few bites I was not impressed and sent it back and, believe me, I never send a dessert back. Next time I will try the cheesecake.To drink Il Centro has a ridiculously extensive wine list that has won the restaurant many accolades and awards. Pages and pages of wines ranging from $25 and up. Glasses were from $5 - $9. There is a wine here for every taste. To me, a wine list like this seems disproportionately large and out of character with the simplicity of the restaurant itself and it's menu but, hey, there are worse things, right?

The restaurant was so busy and dark I honestly couldn't tell if it was clean or not, but everything seemed fine

Il Centro is a lovely, quaint neighborhood restaurant with some old-world charm and reasonably-priced food that, at times, was simply outstanding. The wine list is over the top for such a small bistro, but impressive nonetheless.

I wish that Il Centro would've kept it's old-style decor and not tried to upgrade it with 'modern' art, murals, and TVs. A vintage look to compliment its simple-but-great menu would have made it a true standout. As it is, it is merely quaint. The creme brulee was very disappointing.