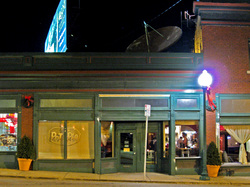 After reading that Pot Pie was voted the best new restaurant in 2004 (when it opened), I was overall disappointed with the experience. True, the atmosphere is warm and cozy, and it's definitely a nice change from all those other mid-priced chain restaurants on the Plaza but, still, I was really hoping for more. The food was inexcusably inconsistent. Still, I wouldn't say not to go here, just don't expect the moon. Choose wisely, enjoy the inexpensive wine, and stay away from the pot pie. Try the Pork Loin tagine with couscous. 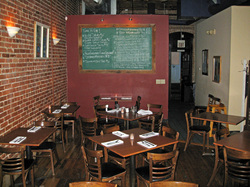 The first thing you notice about Pot Pie is that it's not a big restaurant, and that's fine. Small, cozy, dark, and unassuming, it reminded me of restaurants you see in NYC's West Village. Simple, unadorned wood tables are topped with small candles and flanked by equally simple wood chairs. One wall has exposed brick, the other has a bar. A large picture window looks out on the bustle of Westport Rd. On the back wall is a huge chalkboard with the day's menu. Rock music plays in the background.

Pot Pie does not stand on formality and the waiters here wear what they like, jeans, t-shirts, tennis shoes, whatever, which, in my opinion, makes them look a little grungy, not a look I always like in a server. Our waiter was attentive and competent though, but I was a little irked when he told us the kitchen was 'closing in 3 minutes' when we were choosing dessert. What, the kitchen can't wait an extra 2 minutes for us to decide? 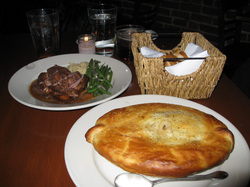 The food at Pot Pie changes often, hence the big chalkboard menu. The selection is not big either, though it does cover enough ground to please most appetites. We started out with a brie & spinach tart ($6) which was exactly that: slices of barely-melted brie and warm cooked spinach laying in a tart shell. And, although it looked beautiful and all the ingredients in and of themselves were fine, I thought that it was too simplistic and that the ingredients did not combine well to create a cohesive whole. After all, simply laying things in a tart shell does not make it a tart. The balsamic reduction drizzled on the plate, though, was delicious.

Our first entree was a pork tagine, Moroccan-style pork loin with a sweet, chutney-type sauce, couscous, and green beans ($19) which was delicious. The pork was a tiny bit too rare for me in the very center, but the rest was moist and melt-in-your-mouth tender. The couscous was simple and plain, and the green beans a little underdone but, on the whole, the dish was excellent. I will ignore the fact that a real Moroccan tagine is cooked, and served in, a clay tagine pot :) Unfortunately, our second entree, a chicken pot pie (!) was, ironically,  not very good. It comes to the table in a huge, steaming casserole dish, promising delicious, down-home goodness, but instead it was runny, watery, and just plain boring. The crust was good, hot and flakey, but the inside had no meat or vegetables to speak of. It might have well been Cambel's chicken soup under a pie crust. After dinner we asked about dessert. There were only 2 choices, which I found a little disappointing after hearing so much about Pot Pie's desserts. The choices were pecan tarts or chocolate chip bread pudding.

After just having pecan pie for Thanksgiving, I opted for the bread pudding. I loved the custardy richness of the pudding, and the bread itself was exquisite, but the chocolate chips, which melted into big gooey globs were an overpowering and unnecessary addition, making the whole thing a little too sweet. Plus, half of it was steaming hot and the other half freezing cold, so I couldn't really enjoy it. I ate a few bites and left it at that.

One thing that Pot Pie has which is totally refreshing is a reasonably priced and totally manageable wine list. Glasses range from $5-$8, bottles around $20. Bottled beers range from $2.50 - $4.00. If you do order a glass of wine, it comes Euro-casual style, in a rocks glass.

We were there on a very quiet Tuesday night and the restaurant was mostly empty and, therefore, clean. Our (paper) menu was stained with a big pen mark and greasy fingerprint, and our dinner plate was severely chipped, which makes me wonder a little about what I can't see. But, maybe that's just me...

Pot Pie is a warm and cozy little restaurant to go have a good meal when you don't feel like dressing up or getting fussy service. The pries are reasonable and the menu changes often, so it never gets boring. The wine and beer prices can't be beat.

The food was unpredictable, some good, some just OK, some downright bad. The service was fine, but the chipped plates and dirty menus left us wondering.