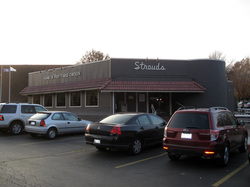 Although the atmosphere of the new location is questionable, Stroud's is a great place to go when you want down-home, pan-fried, gravy-covered goodness. Try anything with pan-fried in the description, gravy, and the excellent sugary, warm, cinnamon rolls.

The atmosphere of the new Stroud's in a little bit of a conundrum. Imagine a sparkling-clean exterior with its dark colors and stark lines, and an interior with fresh industrial carpet, black leather booths, and a bustling football-watching bar scene, and you get the impression of a modern, contemporary restaurant where you might expect to order a blue cheese burger, buffalo wings, or a Caesar salad with chicken. Now throw in traditional red & white checked vinyl tablecloths, cute country-style chairs, and Grandma's yellow, ruffled window curtains, and cover the walls with newspaper and magazine articles about how great your down-home fried chicken is, and you have a restaurant with a severe identity crisis. Is it modern and contemporary? Or is it down-home Country? Who knows? Good thing, people do know exactly why they come to Stroud's, and the atmosphere, though unfortunate, is neither a reason nor a deterrent.

Server's here at Stroud's remind me of the old days when diner waitresses had big hair, smacked gum, and called you 'honey'. These might be a new version, with ponytails and t-shirts, but they still had that old-school diner attitude, and they still call you 'honey'. At one point, our plates were slapped down on the table so hard I almost jumped. Still, orders and delivery were attended to with utter urgency, I mean, efficiency... 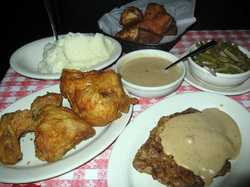 I could go on and on here about how the green beans were canned, the mashed potatoes tasted like flakes, and the salad is simply iceberg with bottled dressing (though sometimes a good bottled ranch is awesome!) but, seriously, the stuff you come here for, the bad, the fattening, the fried, and the sweet, is seriously fantastic! Anything with pan-fried chicken, Stroud's specialty, is bound to be amazing. The chicken is plump, juicy and tender on the inside, golden, crispy, and delicious on the outside, never greasy or heavy. The family-style chicken dinner ($14.50) which comes with 3 pieces of pan-fried chicken (1 huge breast and 2 chef's choice), soup or salad, and all the fixins is a good choice. But, if you don't want chicken, the chicken-fried steak ($15.75) was also tasty, though the steak was such good quality it might have been a little too good for chicken-frying, if you know what I mean. My boyfriend actually said he missed the fatty gristle that you normally get with that kind of dish. (Well, to each his or her own...) Also, the gravy served with both the chicken and steak was excellent. Milky, slightly peppery, thick, it made everything taste that much better. I slathered it on every morsel, arteries be damned! But, let's get down to the truth here, what makes Stroud's so over-the-top-good is the basket of cinnamon rolls that comes with every order. These yummy sweet delights are compact and dense and served warm, the dough eggy and only slightly sweet, covered in a thick, sugary mix of sugar and cinnamon that slightly caramelizes and is still making my mouth water. Seriously, my mouth is watering!! And, the best part? Although there were plenty of cinnamon rolls served with our meal to get us through, you can buy more at only    ¢ each!! yum! The mix of the salty, fatty, and sweet made this one satisfying meal. I left here feeling stuffed but it was worth it.

Stroud's seemed so new there was no way it could be messy. Everything reeked of newness. The bathrooms were fun, there is a projection image on the mirror. It was only commercials, but it was still cool.

What Stroud's does, they do well, and they have the awards and accolades to prove it. The pan-fried chicken, gravy, and cinnamon rolls are amazing.

The atmosphere is confusing, to say the least, and the bar is distracting and noisy. The service is a little abrupt, and the green beans and mashed potatoes taste like bad school food.