We ate at Tarte because it is attached to the hotel where we were staying, and because the menu on the website looked fantastic! Actually, the whole website is pretty darn cute. Unfortunately, the food didn't live up to the tasty descriptions. In a city like LA this is particularly disappointing because there are so many other options that are good. Too bad. I had such high hopes. Maybe one day, if I find myself staying at the Farmer's Daughter again, I will give it a shot, maybe I'll just sit outside and have coffee or a cocktail, maybe I'll give the banana walnut coffee cake a go. But, for now, it's not on my most-recommended list. Try the 3 sausage hash. 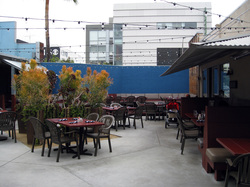 Attached to the Country-motifed Farmer's Daughter hotel, Tarte carries the country theme even further with gingham napkins, farm-type wood tables and banquets, and tall cactus. Half inside and half out, the restaurant itself is small and intimate, homey but not too cute, the outside is a spacious courtyard that is a welcome refuge from busy Fairfax Blvd. Fun jazz, pop and rock music plays over outdoor speakers giving the courtyard life and, at night, rows of strung lights create a party atmosphere, as if you are at a party in someone's backyard.

Maybe it's because it's attached to a hotel where there are probably many tourists who don't have a clue, maybe it's just LA, but our server was a little cold, neither friendly nor rude. The busboy, however, was extremely personable. Go figure! With time our server warmed up a bit, but it took time. Other than that, the service was fine. Dishes came out on time, coffee was refilled, etc. 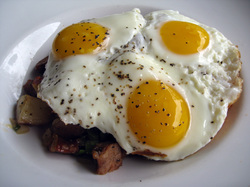 We were here for breakfast, specifically because the menu looked so irresistibly good. Unfortunately, the food did not live up to the descriptions. Healthy whole wheat flapjacks ($7.95) with bananas were disappointingly flat and thin, and served with powdered sugar and fake syrup, which struck me as ironic.  I asked the server to bring honey instead. The Twisted BLT ($8.95), a multi-tiered BLT sandwich with egg, came on nondescript bread and was limp and cold. The one standout was the sausage hash ($8.95), made with chicken, Andouille, and alligator sausage, peppers, potatoes, and onions, and topped with 3 eggs as you like them. The potatoes were more like home fries than hash, but they were hot and flavorful, the eggs were perfectly cooked. The hashes were new on the menu, we were told. I wish I had ordered one too.

Still, as I look at the menu I see things that catch my eye: banana walnut coffee cake, corn beef hash, steel cut oats, and I think, maybe, there is hope.

We were sitting outside but everything seemed clean. The honey dispenser was sticky and messy which could have been easily avoided.

Other dishes were so-so, flapjacks served with fake syrup, service not overly friendly.