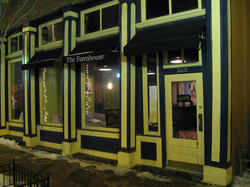 The Farmhouse has a lot going for it. It is a wonderful concept of fresh food provided by local farms and providers, and it definitely fills a culinary gap in the River Market area, if not the entire Kansas City metro, by serving conscientious food to people who actually might care what it is they are putting in their bodies. Bravo! On the other hand, The Farmhouse misses the mark in many key areas, including sloppy service, middle-of-the-road decor, and inconsistent food and for that we thought it was altogether an unremarkable dining experience. We understand that The Farmhouse is new to the area, and especially new to dinner service, so we hope that they continue to improve their weak points and focus on what is right with their concept. If nothing else, they have an excellent location and an eager audience waiting for them to bloom. Personally, I look forward to going back in the Summer for a piece of that blackberry-raspberry pie. Also try the goat cheese salad (though ask for the cider-walnut vinaigrette), house-made pie and French Press coffee 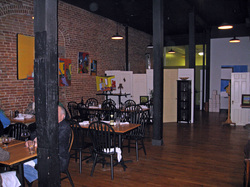 Located on a picturesque corner in Kansas City's River Market area, The Farmhouse boasts impossibly high ceilings and huge picture windows giving the space an open loft-like feel. Warm, exposed brick walls flank each side of the two dining rooms, and honey-colored wood floors are scattered with occasional Persian rugs. Large brightly-colored paintings, although one or two are of farm animals, seem too contemporary for the farmhouse concept, as do the shiny black modern tables and chairs, and those things, combined with the random placement of furniture, lend a certain air of identity crisis to the overall feel.

Although our server was friendly and pleasant in a wonderful Kansas City manner, the service generally appeared untrained and unprofessional. Silverware was altogether forgotten between courses or simply slapped on the table in a haphazard way. Dishes  arrived and were cleared with no service protocol whatsoever. That's okay if you are ordering a $6 sandwich, but not when you have a $25 entree. 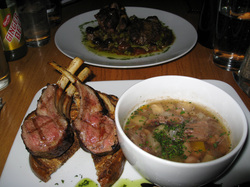 The Farmhouse prides itself on fresh local food that is both comforting and soul-soothing, to use their own words, and the menu reads well with a nice selection of produce and meats prepared in an unfussy but sophisticated manner. To begin, a nice spinach salad with a crispy, oozy disc of warm goat cheese was an exquisite bargain at only $4, and two small braised rabbit turnovers ($8) were tasty but essentially unbalanced with a delicate philo dough too light to hold such a hearty earthy filling. Beneath them,  beautifully dressed field greens in a tangy and sweet cider-walnut vinaigrette were excellent.

For entrees, a perfectly cooked and succulent pork cheek could not save an otherwise dry pork osso bucco and overcooked  and salty spaetzle ($21). And a grilled lamb rack ($18) was delicious with a drizzle of balsamic reduction and herb pistou but was a tiny portion and served with a watery and uneventful white bean stew. True, the $18 is a very small price to pay for lamb, though I would rather pay twice as much to get a full meal out of it.

One of the biggest surprises of the evening, but not in a good way, was the absence of any bread and butter with the meal. After all, what says soul-soothing comfort better than a thick slab of bread with sweet butter? And, with the very small entree sizes, we would have welcomed the extra food.

For dessert, The Farmhouse offers only 2 things: pie ($3.50), and a selection of ice creams ($1 per scoop). Remembering a blackberry-raspberry pie I once saw on their menu in August, I was a little downhearted to hear the Winter offering was carrot-squash. Seriously? It sounded less-than-desireable, to say the least, but I gave it a try in the old write-the-review spirit, and was pleasantly surprised by its subtle and rich flavor, the filling being almost savory, like pumpkin pie, and the crust resembling a crumbly sweet sugar cookie. Topped with a scoop of house-made vanilla-lavender ice cream, it was rather delicious.  Coffee was also good, provided by the Broadway Roasting Company and served in an individual French Press. I wish the server had explained that there was a timer on it because, unfortunately, I poured mine a little early. I also wish he had brought me decaf like I had requested, and I had not been up most of the night twiddling my thumbs in a caffeinated-induced anxiety attack.

Everything at the Farmhouse seemed clean and in order, though the kitchen window was blocked by a wall of doors. Bathrooms were clean and tidy, and smartly done in white subway tile.