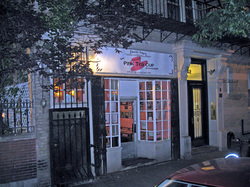 The Pink Teacup was not an elegant, four-star dining experience. So what?! The food, for the most part, was great, the portions huge, and the prices right. So, the fried chicken was not the best, there are plenty of other things to keep you entertained, and well-fed. The catfish was excellent, the collard greens and cornbread delicious, and the banana pudding to die for! 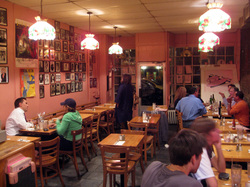 The Pink Teacup is, well, just like a pink teacup: petite, intimate, and very pink. Small, light-wood cafe tables are placed very, very close together and even though it wasn't busy when we went, if it were it would have been difficult to slide into the table without knocking something over with your butt. The walls are a very vivid shade of Pepto Bismal pink and on one wall is an Alvin Ailey poster, a large poster about what to do if someone is choking, and the usual  collection of photos of the stars. I think I spotted a photo of a very young Brooke Sheilds.

Service was friendly but a little slow and not too good at communicating. There was only one server for the whole restaurant and speed was not his priority. 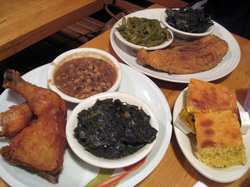 Dinners here come all-inclusive with soup, salad, cornbread, sides, and dessert, and that means a lot of food. If you come, be prepared to eat! With offerings from frogs legs to BBQ ribs there is a lot to choose from. We settled on a fried chicken (white or dark meat) and fried catfish ($14.40) dinners.

First to come was a cup of chicken noodle soup, a dark, rich broth that was a little salty but had nice, strong chicken flavor. The soup also had a good amount of shredded chicken and lots of broken fettucine-type noodles, though the noodles were soggy. The next course was supposed to be salad but they were out of salad. We are not sure how that happens, but no one mentioned it until we asked (see above for notes on service).

The catfish was delicious, dusted lightly with cornmeal, spices, and flour, it came out hot and crispy, but not greasy. It was a large portion. The fried chicken was not as good, deep fried but not having any coating on it, it didn't have much flavor. The sides were excellent. Collard greens were juicy and spicy and had a nice smoked flavor from smoked turkey, not bacon. The green beans were also great, as were the black-eyed peas. They were out of okra. The meals were also served with cornbread that was thick, sweet, and moist.

For dessert, the dinners come with a choice of jell-o or bread pudding. Jell-o? Seriously? The bread pudding was really nice, a small square piece of warm, dense, rich, eggy pudding, tasting heavily of cinnamon. I was stuffed by then, but still ate the whole thing. I should also note that our neighboring table, which was ooooing and aaahhhing over the banana pudding offered me a bite, which I took. Fantastic! This was, without a doubt, the best banana pudding I'd ever eaten. Incredible! I will be back if, for nothing else, that banana pudding. Well, and they also have a fried pork chops and apple fritters for breakfast that sounds pretty darn delicious.

The Pink teacup does not serve alcohol, but you can BYOB for no extra charge. I had a great freshly-brewed iced tea, though, that was nice and strong.

A little messy, the Pink Teacup is neither new nor overly clean, but if it were it wouldn't be any fun. Here, the messiness really is part of the charm. The bathrooms too were only OK. Word of warning: they are down a very steep, very narrow metal spiral staircase. Hold on to the the rail!

Service can be a little slow and uncommunicative. Crowded tables could be uncomfortable if crowded.