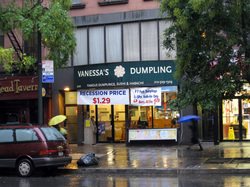 If you find yourself in Union Square and are DYING for cheap, inexpensive food, than you may want to pop in to Vanessa's for a quick fix of dumplings. For all other things, skip it. The surroundings are messy and uncomfortable, the service rude, and you may be poisoned by scalding soup in plastic. If you want really great dumplings at an even better price, go to Chinatown.

The atmosphere is extremely basic. Inexpensive tables are on an elevated platform to the right, or in a row to the left. On the right, a long open fry-kitchen, and an order counter with the menu suspended overhead. Large refrigerators offer a variety of drinks and sushi items in plastic. The room is very brightly lit.

Service is counter service but the woman behind the counter was extremely rude, barking at us when we asked to have a table wiped so we could sit down. 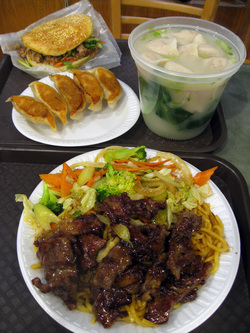 The food came out steaming on the tray and looking beautiful. Tasting it, however, it did not live up to our expectations. The lo mein was fatty and greasy, the soup was burning hot in a plastic bowl (hot soup in plastic is a no-no! See Hormone Disruptors) and the broth was weak and watery. The pork pancake was simply a pork sandwich in what seemed like a squashed and fried sesame hamburger bun, and the bubble tea was watery with very mushy tapioca. The only thing that was decent here was the seaweed salad, which was basically the same you buy at the supermarket, and the dumplings, which were a little too doughy but had nice flavor and are a good deal, money wise. Still, they came nowhere near the dumplings we had in Chinatown for $1!!

Overall, Vanessa's Dump is not very clean. Besides the aforementioned dirty table, the bathrooms were messy with graffiti-littered walls. Coming from the back, a rather unpleasant, but unidentifiable odor.